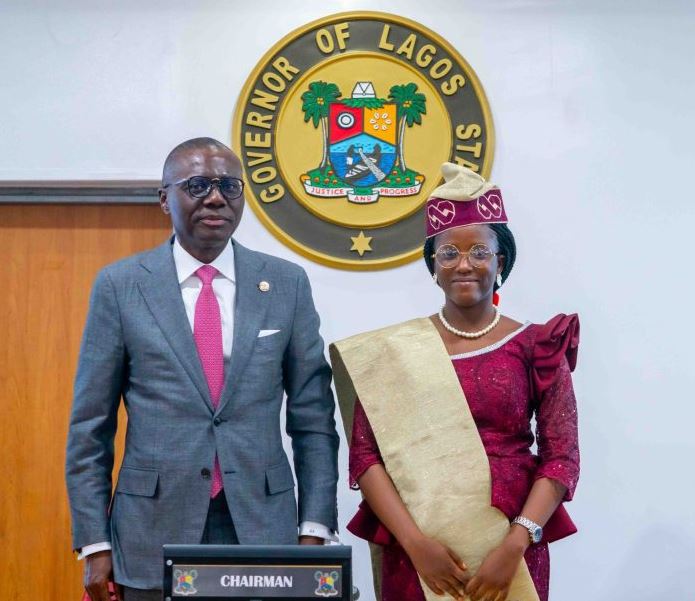 1-day Lagos Governor made the announcement in Lagos on Monday, when Gov. Babajide Sanwo-Olu relinquished the seat of authority to her for a brief period in order for her to serve as one-day Governor of Lagos State.

Jemimah stated that increased money would allow more schools to open, particularly in locations where some pupils are forced to learn under difficult conditions.

The 1-day Lagos Governor Jemimah dwell on the need to invest more in digital literacy in the state’s public schools, pressing Gov Babajide Sanwo-Olu to guarantee that the promised metropolitan fibre is installed in public schools.

The 17-year-old Angus Memorial Secondary School student from Somolu, Lagos East, also asked for help from her parents in realizing her future ambitions.

Jemimah 1-day Lagos Governor, hails from Edo State, won the 2020 edition of the Spelling Bee Competition, earning the right to serve as governor for one day.

Jemimah, who conducted  the cabinet meeting, praised the Gov Babajide Sanwo-Olu government for launching commendable programs under the T.H.E.M.E.S agenda to improve governance and service delivery.

Gov Babajide Sanwo-Olu, she said, was a “transformational leader” who had made huge advances in education, health, housing, infrastructure renovation, transportation, youth, and women’s development during the administration’s last two years.

“Dear Mr. Governor, I applaud your team for their outstanding leadership and for being proactive in critical areas. To expand access to education, the state government has begun to renovate schools and build new ones.

“This endeavor has been bolstered by a slew of innovative initiatives, including EKO EXCEL, Lagos Learns Together, Read Loud, EKO Digital School, and the job initiative.”

“These commendable programs have had a positive impact on students, teachers, and out-of-school learners, as the initiatives have improved teaching and learning with outstanding results.”

“I can affirm that,the deployment of technology, teaching approaches in Lagos schools are no longer what they used to be.”

“The success of these programs can be seen in the academic performance of pupils,” the one-day governor added.

The Spelling Bee competition, which pits public schools from around Lagos against one another, is one of the state’s legacy programs, having been launched in 2001 by the then-First Lady, Sen. Oluremi Tinubu, through her New Era Foundation.

The state government has been in charge of the program since 2015, collaborating with partners and stakeholders to help it achieve its goals.

Gov Babajide Sanwo-Olu responded that the 1-day Lagos Governor program was one of the state’s methods for grooming future leaders.

He claimed that the initiative had allowed the winners to improve their learning while also exposing them to the fundamentals of public administration.

“I am pleased to report that the competition has met its stated vision and objectives. The organizers will keep track of your future efforts to ensure that you develop the necessary leadership abilities and become responsible citizens.

“Your victory at the tournament inspires us to accomplish much more, particularly in education.”

Gov Babajide Sanwo-Olu said, “We will ensure that your teachers are given the proper encouragement so that they can continue to impart quality knowledge across our various schools.”

The Spelling Bee Y2020 winners were given a tour of government offices, buildings, and the governor’s official residence before attending the cabinet meeting.

Related Topics:news from Lagos
Up Next