2023:Elect An Energetic President, Because No Leader Can Lead From Hospital Bed-Rotimi Amaechi

Minister Of Transportation Rotimi Amaechi on Monday said no president can lead Nigeria from the hospital bed during a meeting with Ogun State Governor, Dapo Abiodun and APC delegates in Abeokuta, the state capital.

Minister of Transportation and presidential aspirant under the ruling All Progressive Party(APC) Rotimi Chibuike Amaechi has described himself as energetic. 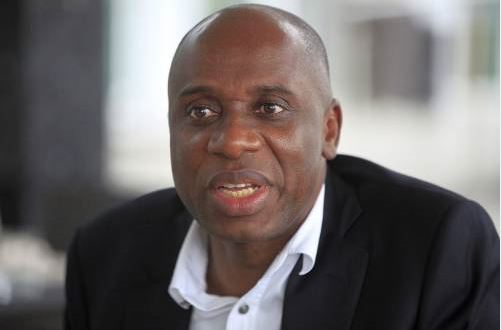 The Minister said on Monday evening that no president can lead Nigeria from the hospital bed during a meeting with Ogun State Governor, Dapo Abiodun and APC delegates in Abeokuta, the state capital.

While canvassing votes from delegates ahead of the 2023 election, the former two-time Rivers state governor stated that while he had been told that being energetic was not enough to lead a state, no one can lead from a hospital bed.

This, according to Amaechi, is one of the reasons he should be chosen over Vice President Yemi Osinbajo, who is from the state.

Osinbajo is 65 years old, while Amaechi is 56. The party’s national leader, Asiwaju Bola Tinubu, who is also running, turned 70 in March.

Tinubu returned to Nigeria in October after a three-month medical trip to the United Kingdom.

Since taking office in May 2015, President Muhammadu Buhari’s frequent trips to the United Kingdom for medical treatment have cost Nigeria more than 200 days.

Buhari’s preference for foreign medical assistance contrasts sharply with the country’s ongoing crisis, which ranges from economic to health and security.

However, Amaechi stated, “I know that there is a candidate from this state, our Vice President, a man of honour, he is a good candidate, but I think that if you look well my experience matters.

“I come with experience, I’m 56 years old, I will be 57 in May, so I’m the bridge between the young and the old. I have energy and people have said, no, being energetic is not enough to preside over a state, but you can’t preside over a state in the hospital.”

Amaechi and his team also paid a visit to Egbaland’s Alake, Oba Adedotun Aremu Gbadebo, at his palace in Abeokuta.

Earlier this month, the transportation minister ran around the Port Harcourt stadium in Rivers State as part of his official declaration as a presidential candidate for the 2023 elections.

He later said he did that to check how fit he was to “carry the problems of the country”.
“Age will not be an issue. I am like a bridge between the young and the old,” Amaechi said.

He added, “People have asked me why I ran round the stadium. I was checking to see how fit I am, so I had to run round the stadium to confirm to myself that I’m strong enough to carry the problems of the country, whether it is mentally or physically.
“Because you need both mental capacity and physical fitness to manage this country.
“You have to be physically strong and have the mental capacity to make decisions on behalf of the country.”