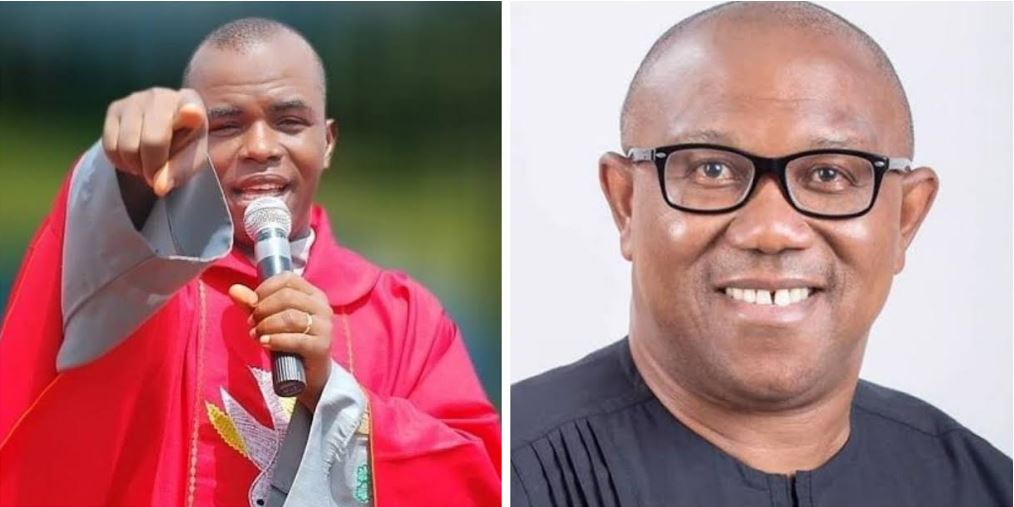 He made the remarks in a message to his Adoration Ministry in Enugu State.

Obi, according to the cleric, is a stingy man who is unconcerned about the plight of those around him.

He also declared that the former governor of Anambra State is cursed and that unless he comes to apologize to him, he will never be President of Nigeria.

He was quoted in the Daily Post as saying: “A stingy man, that cannot give people his money, with this hunger ravaging the land, and you are saying he is the one you want. Do you want to die of hunger? Are you people insane? Where is the Holy Spirit?

MUST READ:  NNPC completes removal of Dirty Fuel in Circulation

“Listen, a good old man is better than a young wicked man; Peter Obi is going nowhere as far as God lives. If Igbos want a representative, it is not someone like Peter Obi.

“I should not have talked but I saw my video going around everywhere as if Fr. Mbaka wholeheartedly came out and apologized. No, I didn’t apologize wholeheartedly, it was out of duress. I had to obey my Bishop, in obedience I had to, it is not of my volition. I did it because I am a Catholic Priest, my Bishop said, do it, my own is ‘Yes my Lord’.

“I did not say he is a bad man; I said he is a stingy man. A hungry man wants someone that is generous; the man has so much money, but he is ‘I, me, myself. But that money will not be useful to him. I am very happy now that I have spoken out. That apology is a poisonous curse against Peter Obi.

“If he is wise, he should have come here after that apology to say he is sorry but he waited. Anybody supporting him is wasting his money, he is going nowhere.

“He is my friend. When he was chased out of Government House, he knew the role I played to bring him back, but how did he pay me back? Night meetings we attended to bring him back, ask him, ask Eselu Uga, ask Archbishop Anikwenwa, they know where and how we did it and he was brought back.

“Ask Peter since then what he used to reward Adoration. If you like Peter Obi, tell him to come and ask for forgiveness. Let him come and redo what he did. There is an altar of God he blasphemed; he defiled an altar of God, the Holy Spirit.

“I called Atiku after that apology, he was in Dubai, I told him that there is a revelation on your presidential election; that you are going to be the President of Nigeria on one condition, that Peter Obi is not going to be your running mate. Peter Obi has incurred a curse to himself, which means that he is carrying a curse; if you want to be President, change him.

“Atiku responded that I cannot, Peter must be my running mate, we must win. You saw what happened. Atiku is still alive. That is why I said it is now that Atiku is preparing to be President.

“Just like Jonathan, I called him, God has shown that you are going to win this election but on one condition; Jega should be changed. If you change Jega you will win Buhari, but if you don’t, Buhari will win you. Goodluck told me, ‘Fr. I will not remove Jega, we will still win’. He held on to Jega and failed.”