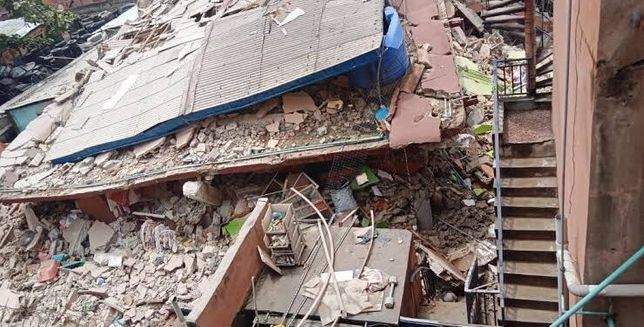 Four people have been killed among the five people who were reportedly trapped in the collapsed building, with one rescued.

It was learned that the National Emergency Management Agency (NEMA) is on the ground, carrying out operations at the site.

Dr Olufemi Damilola Oke-Osanyintolu, the Permanent Secretary at LASEMA, commented on the incident, which has become a common occurrence in the state.

”On arrival of LRT at the scene of incident, it was discovered that a 3 storey building had collapsed at aforementioned address.

“Further investigation revealed that the collapsed building was an adjoining building to another 3 storey building.

“Two people who were trapped inside the building have been rescued and treated, however, we were informed two females that are occupants of the building are still missing. Search and rescue operation is ongoing,” Dr Olufemi said.

The LRT, state fire service, neighbourhood watch, LABSCA, and police are among the first responders on the scene.

MUST READ:  Breaking:EFCC Takes Rochas Okorocha Away After Forcefully Entering His Home

Meanwhile, the area has been cordoned off to facilitate evacuation and rescue efforts.