A young man identified as Joshua Ejiyere has cried out for help after losing his right arm several years ago on a poultry farm registered under the West Coast Investment Limited to a mill machine operated by his late father’s friend, Michael Ujoh. 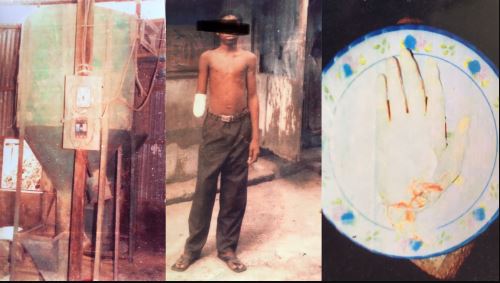 Ejiyere, who demanded justice, told SaharaReporters that the incident ended his aspirations and dreams for a better life because no one would hire him.

He explained that in 2004 when he was 16, he visited a poultry farm owned by Ujoh, who was a friend of his father’s. Due to their relationship, Ujoh allowed the Ejiyeres to visit the farm and take the remnant of processed maize, which was later used to feed pigs reared by the latter’s family, according to the young man.

According to him, Ujoh benefited as well because the Ejiyeres cleaned up the warehouse.

According to the young man, Ujoh was aware that his hand was inside the machine, but he (Joshua) was unaware that the machine was about to be powered up because he was looking in another direction.
Following that, the Ejiyeres hired some lawyers, who took over the case in 2004. However, Joshua claimed that they abruptly fled in 2015 after failing to obtain justice.

MUST READ:  I'm not getting married again because Jesus told me-Pastor Chris Okotie

He claimed that the legal representatives had not provided a compelling reason for withdrawing from the case.

He bemoaned how the incident had cost him his desired life and his inability to find work.

Joshua Ejiyere said, “I was behind the machine when he turned it on and it took off my right hand from my body. In the pool of my own blood, I was rushed to the hospital. They refused to take responsibility for the bills; then my elder brother took the case to the police station which did not yield anything positive. It was later taken to court.

“At the court, the lawyer of the machine operator turned the case upside down, saying that I was a thief and the machine operator did not know I was there. The magistrate court in Ojo ruled in my favour despite the allegation.
“And after several sittings in court, the case was later taken to the High Court, Badagry in 2007, which lasted till 2014 after which the court ruled in my favour by Justice E. A. Adebajo at the Lagos High Court Igboshere.

MUST READ:  Synagogue Hostage-taker in Texas was British-FBI

“After the high court ruling, they went for appeal in that same year, till date nothing has been done. I have gone several times to my lawyer in the person of Chief Macdonald O. B, Omolemen (Gab-anna chambers). They keep telling me that they haven’t given me a date. Honestly, the lawyer just backed off without a word in 2015.

“Because of the frustration, I have taken the case to state command but they said it was beyond their power. So, I went to Alausa, Ikeja, the Ministry of Health referred me to the Ministry Of Justice after submitting several letters, I was advised to register at the Ministry of Disability Affairs, but all had been to no avail. I lost hope and confidence in the judicial system of this country and the hope of the common man.

MUST READ:  NDLEA's request to detain Abba Kyari and others for 2 weeks granted by the Court

“My dad and my mother are late; I have no means of survival. Life has been really tough for me because I have tried on many occasions to get myself engaged with something doing but even when I explain what I can do that I’m not totally useless, nobody wants to give me the opportunity to try.

“I am using this medium to plead with the government and general public to help me get justice and to bring an end to injustice in Nigeria. Please help me.”

See screenshots of documents below 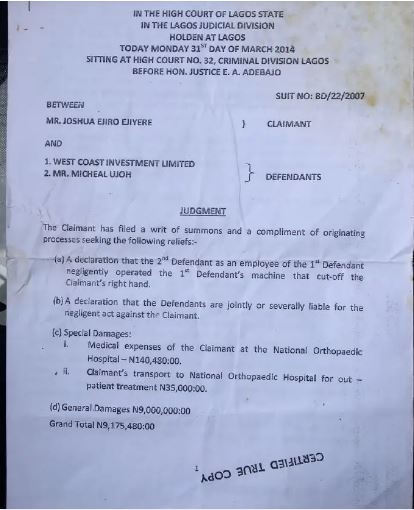 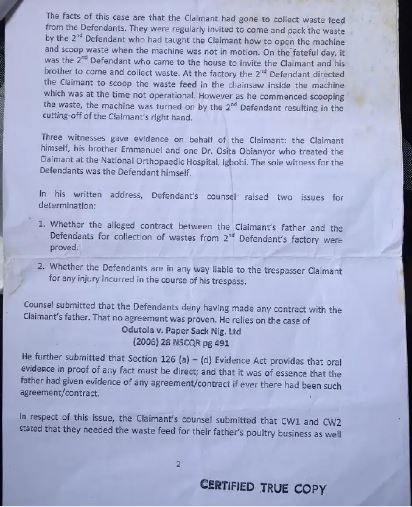 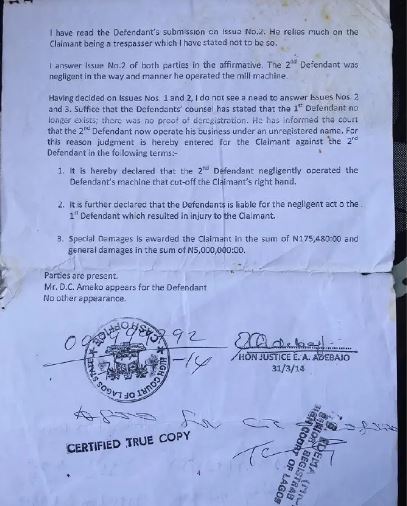