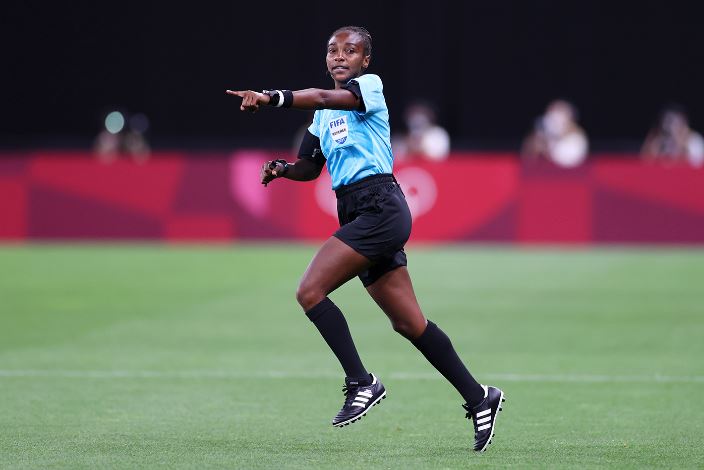 Salima Mukansanga is set to make history as the first woman to referee a men’s event at this year’s Africa Cup of Nations (AFCON) in Cameroon.

Salima Mukansanga is from Rwanda and she’s 33 years old. She’s is one of football’s most regarded female officials, having overseen matches at the Women’s World Cup, Africa Women’s Cup of Nations, and CAF Women’s Champions League.

Mukansanga, who is on the FIFA International Referees List, officiated women’s football at the Tokyo Olympics last summer. Now, she’ll make her mark at one of the most prestigious international men’s tournament which will be a great achievement for her.

Four women are among the 63 match officials for this year’s AFCON competition. Carine Atemzabong of Cameroon, as well as Fatiha Jermoumi and Bouchra Karboubi of Morocco, are among the participants. Unlike Salima Mukansanga, none of them will be the match referee.

Female referees have been sweeping the globe recently, with EFL official Rebecca Welch becoming the first woman to officiate a third-round FA Cup men’s match at the weekend.

Women have been barred from the field of refereeing for far too long, and are frequently ‘supposed’ to just referee women’s matches. People like Mukansanga are helping to improve the game’s terrain.

Salima Mukansanga is the first woman to serve as an AFCON official, but she will not be the last.