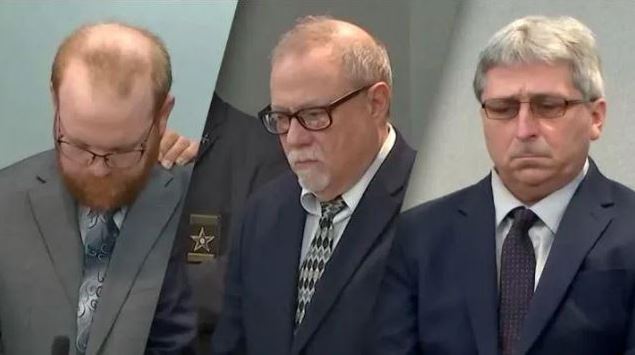 The family of murdered Ahmaud Arbery has demanded that the three white men convicted of his murder receive the heaviest possible sentences.

Ahmaud Arbery killers to face life in prison this was established during a sentencing hearing on Friday, Ahmaud Arbery’s mother told the court that the verdict will help bring “closure.”

Travis and Gregory McMichael, as well as their neighbour, William Bryan, were found guilty of murdering Mr Arbery in February 2020 by a jury in November.

The case has sparked debate about racial justice in the United States South.

Ahmaud Arbery, a 25-year-old Brunswick, Georgia native, was out jogging in a nearby, largely white neighbourhood when the trio tracked him down in pick-up trucks and trapped him before shooting him during a scuffle.

The defendants claimed self-defence while attempting a citizen’s arrest of a suspected burglar, but prosecutors claimed race was a factor.

Gregory McMichael, 66, his son Travis, 35, and Bryan, 52, the incident’s videographer, were all found guilty of murder, aggravated assault, false imprisonment, and criminal intent to commit a felony.

The three are serving life sentences, though the judge will decide on Friday whether any of them will be eligible for parole in 30 years.
Members of the Arbery family made impassioned victim impact statements in court, calling for the three men to be sentenced to life without the possibility of release.

“Ahmaud Arbery never said a word to them, he never threatened them, he just wanted to be left alone,” said his mother Wanda Cooper Jones.

Ms Jones, who sat in the courtroom throughout the trial, also spoke directly to her late son.

“This verdict doesn’t bring you back, but it does help bring closure to this very difficult chapter of my life,” she said.

“I made a promise to you the day I laid you to rest: I told you I love you and someday, somehow, I would get you justice.”

Jasmine Arbery recalled her younger brother’s love of the outdoors, his athletic build and “dark skin that glistened in the sunlight like gold”.

“These are the qualities that made these men assume Ahmaud was a dangerous criminal and chase him with guns drawn,” she said.

“To me, those qualities reflected a young man with life and energy who looked like me and the people I love.”

Marcus, Arbery’s father, bemoaned the fact that he would never have another day with a child who had altered his life.

Attorney Kevin Gough urged for clemency for the men, claiming that a life sentence for Bryan, his client, would be “unconstitutionally cruel and excessive.”

Attorneys for all three have stated that they intend to appeal the verdicts. They’ll also go on trial in federal court next month for allegedly targeting Arbery because he’s black.

Deadly gangs on motorbike cause mayhem in Zamfara villages