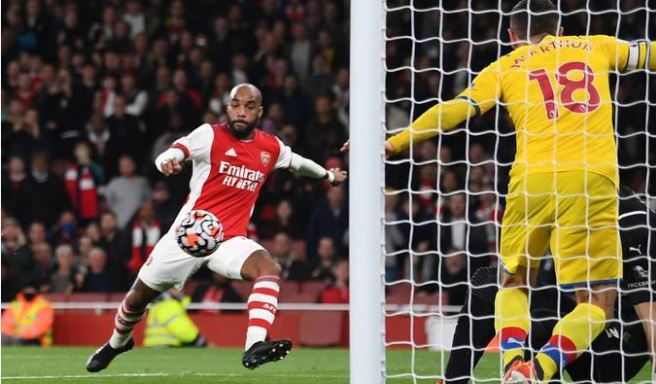 Just as it appeared that Odsonne Edouard and Christian Benteke had fired Patrick Vieira’s Crystal Palace to victory at Emirates Stadium, Alexandre Lacazette late strike earns a point for Arsenal with the final kick of the game; Mikel Arteta takes issue with James McArthur’s challenge on Bukayo Saka.

Vicente Guaita’s stop from Nicolas Pépé’s looping drive in the eighth minute allowed the ball to fall to Pierre-Emerick Aubameyang, who turned it in, to score against the ‘Eagles’ for the fourth time in seven games.

Aaron Ramsdale then made a fantastic save to prevent Conor Gallagher from scoring with the final ball of the half.

Thomas Partey, buoyed by the confidence gained by scoring in both of Ghana’s games over the international break, unleashed a strike that curled agonizingly near minutes after the interval.

That same confidence cost him in the 50th minute, when he sloppy threw the ball away under pressure from Jordan Ayew, allowing Christian Benteke to break through and score.

The arrival of Lacazette in the 67th minute energised an Arsenal side that had been mired in its own thoughts, but Guaita did well to prevent the Frenchman from putting the hosts ahead.

Within seconds of that stop, Palace countered at the other end, with Michael Olise, their own substitute, playing a key role in bringing the ball to Édouard, who scored off the underside of the crossbar.

As Palace dropped back, Arsenal did everything they could to get back into the game, and Lacazette pounced on a loose ball in the 95th minute to extend Arsenal’s unbeaten run to six games.

Meanwhile, the ‘Eagles’ have now drawn three games in a row.

Arsenal manager Mikel Arteta says  McArthur should have seen red when Bukayo Saka was kicked in the back of the calf by the Crystal Palace midfielder at the close of the first half. 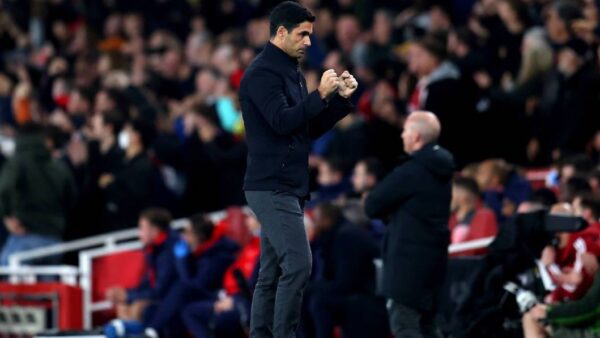 Referee Mike Dean booked Crystal Palace midfielder McArthur, but Bukayo Saka had to be replaced at halftime, and Arteta was upset that McArthur remained on the pitch.

“They have to be looked at if we want to detect things that are truly relevant in a game and can influence a football match,” he said.

Mikel Arteta, I’m not sure; we’ll see how things progress. He obviously couldn’t go on, and he’s a tough kid who wants to keep playing, but he couldn’t, and we have a short turnaround for the next game, so we’ll see how he progresses.

Arsenal Boss Mikel Arteta says he did not speak with Referee Mike Dean about the decision and it wasn’t the right moment.

Mikel Arteta also shared his thought on how VAR should be used differently: so you make a straight decision when it’s so evident and clear – you know right away and they have to play with ten men.

Arsenal will host Aston Villa on Friday at 8 pm. A win for Aston Villa will see them go above Arsenal in the English Premier League table while Crystal palace will play struggling  Newcastle on Saturday at 3 pm. Newcastle is yet to record a win this season and sits second on the bottom of the table.

Arsenal gets a comfortable win over Aston Villa 3-1