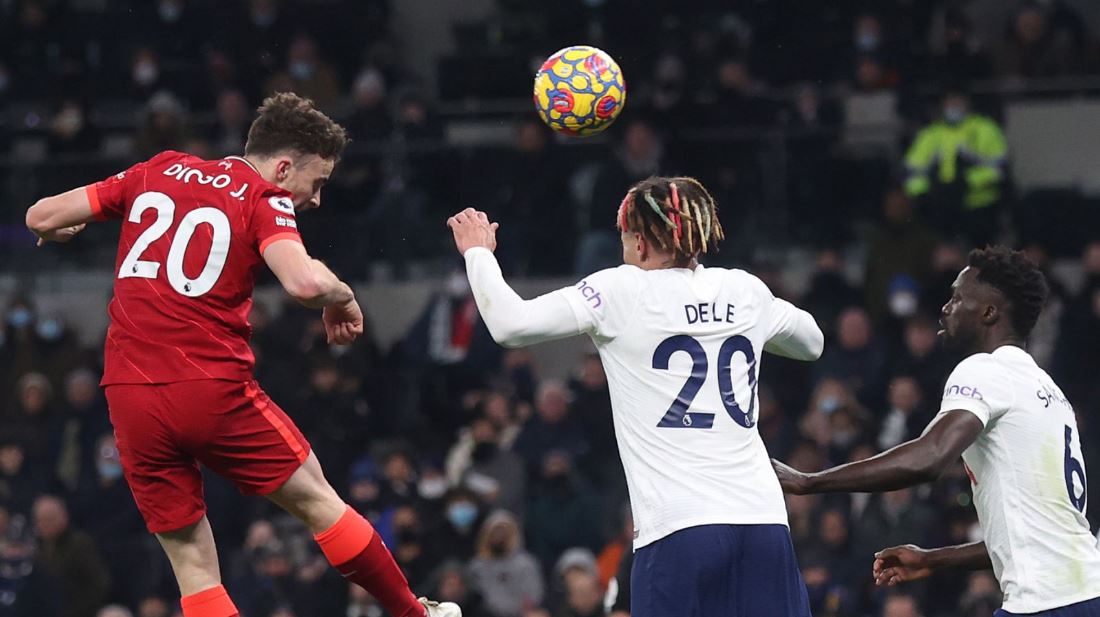 Liverpool and Tottenham played out a 2-2 draw in one of the most exciting Premier League games in recent years, leading to Jürgen Klopp’s side dropping points at Tottenham for the first time in over four years. Reds have now dropped three points behind Manchester City that sits top on the Premier League standing.

Alisson gaffe as Reds draw 2-2 at Spurs on a weekend when Covid postponements shredded the Premier League schedule but fans were treated to a thriller in North London.

In spite of Liverpool’s high-tempo start, it was the home team who struck first. Spurs took an early lead after Harry Kane was played in by Tanguy Ndombele and hammered the ball into the corner of the net beyond Alisson’s outstretched arms.

Dele Alli broke clear and should have increased the lead, but the Brazilian goalkeeper made a spectacular stop to deny him. Sadio Mané lofted a cross into Diogo Jota, who headed home to tie the score ten minutes before halftime, finishing off an enthralling first half.

Spurs raised their game in the second half, causing a slew of difficulties for Liverpool’s defence, but Kane wasted a pair of golden opportunities to reclaim the lead. With little over 20 minutes remaining, Klopp’s troops would ultimately break the deadlock.

A goal-line scramble allowed Trent Alexander-Arnold to deliver the ball across the box to Andy Robertson, who nodded the ball home to put the visitors ahead. Their joy would be short-lived, as they were reprimanded just four minutes later. Alisson gaffe would allow Heung-Min Son in behind to score in an empty net, bringing the score back to 2-2.

Liverpool still adjusting to Alisson gaffe that allowed Spurs to restore parity, day got bad as goal-scorer Robertson was sent off moments later for a dangerous challenge, leaving Liverpool with one fewer player for the final fifteen minutes. At first, seeing a yellow that was then upgraded to a red after VAR asked referee Paul Tierney to consult the pitchside monitor.

Fortunately for the Scottish captain, the visitors would hang on to a hard-fought point in the final minutes. Tottenham’s failure to win all three points was unsurprising, given that the North Londoners had only won one of their previous 17 Premier League games against Liverpool.

Liverpool has now lost ground to Manchester City in the title race but will be happy that Alisson gaffe and the sending off of Robertson did not cost them all three points, a point seems to be a fair result.

Liverpool boss Jurgen Klopp made three changes from the 3-1 win over Newcastle; Oxlade-Chamberlain dropped to the bench while Henderson and Thiago were out completely, replaced by James Milner, Naby Keita and 19-year-old Tyler Morton, making his first Premier League start.

Van Dijk, Fabinho and Jones weren’t in the squad again having tested positive for Covid in the week.

Should Kane still be on the Pitch? 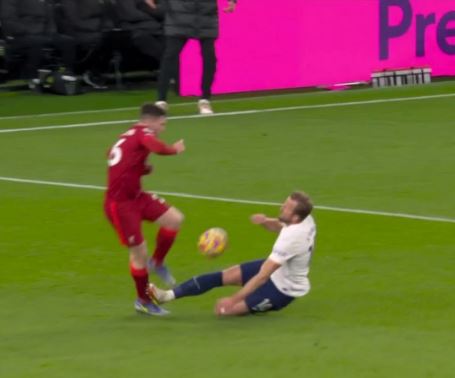 Spurs could have been reduced to ten men after Harry Kane’s studs touched Robertson’s ankle, but Referee Paul Tierney showed a yellow card and VAR did not interfere.

Harry Kane speak: It was not a Red card

Asked if he was worried he would be sent off, Kane said: “No, definitely not. I thought it was a strong tackle but I won the ball, although I’ve not seen it back.

“When you are playing against top sides and fighting for points, there are going to be strong tackles. They checked it and it stayed as a yellow card and we move on.

“It didn’t feel like it [a red card] and Andy Robertson said I just caught his foot. When you slow stuff down in football it makes it look worse than what it is. But that’s why VAR is there.”

Antonio Conte: “I haven’t seen the Robertson situation with Kane. I haven’t seen the possibility of a penalty. My staff said to me that the second goal was a clear handball. And I think it’s not right to comment on the refereeing decisions after the game.

I don’t know if Jurgen wanted to comment on this, but I can tell you that my staff said to me it was incredible to give it, and not disallow it, because there was a clear handball from Salah.

“But the game was an exciting game, there were great emotions from the people. I don’t like that we have to speak about the refereeing decisions at the end.”

MUST READ:  EUROPEAN WORLD CUP QUALIFICATION ROUND UP

Jurgen Klopp: “There were obviously many other things that were influential in this game, but some of these questions are better to ask Mr Tierney.”

Asked if Kane’s punishment should have been stronger: “Definitely, stronger. We can give Robbo a red card, it’s not the smartest challenge of his life. But that’s definitely a red card, no doubt about it. So we have a VAR sitting there, and he has a look again at the Robbo situation. Fine, that’s what he’s there for. What did he do in the Kane situation?

“And the penalty situation with Diogo Jota. Mr Tierney told me he thinks Diogo stops on purpose because he wants the foul. If you want to shoot you have to stop because you cannot run and shoot at the same moment. It is always helpful if you have played football yourself in the past. When you see the situation back, where is he stopping? I don’t understand that.

Liverpool plays Leicester in the Carabao Cup last eight on Wednesday at 7.45 p.m., followed by a Premier League match against Leeds at 12.30 p.m. on Boxing Day.