A 22–year-old Togo National Identified as  Mohammed Kabiru was rescued from attempting to jump into the Lagos lagoon from the Lekki-Ikoyi link bridge by patrol officers of the Lekki Concession Company. 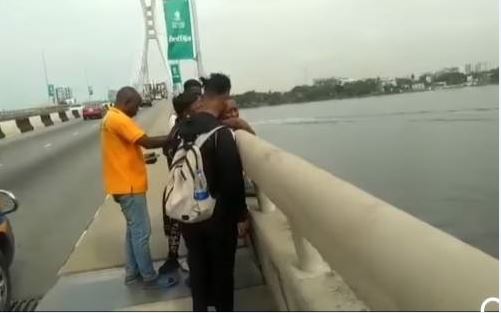 In a video posted by the company on its Twitter handle on Wednesday, some people can be seen urging the man not to jump into the lagoon.

However, the person behind the camera could be heard asking onlookers in Yoruba to assist in restraining the man and preventing him from committing suicide.

“Thanks to the quick intervention of LCC Patrol Officers, a young man was saved from committing suicide on Lekki-Ikoyi Link Bridge. He has been handed over to the Police,” the company wrote.

MUST READ:  Terrorist Threats Compelled Government Schools To give Students 13 Exams In One Day
Related Topics:featured
Up Next