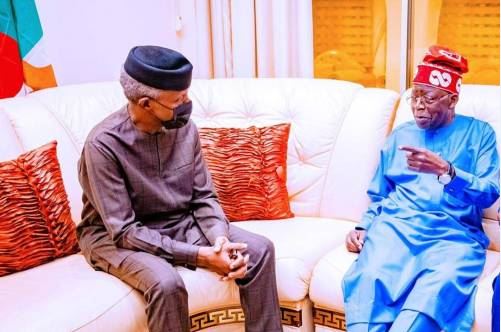 Yemi Osinbajo and Bola Ahmed Tinubu in a conversation

The ruling All Progressive Congress (APC) party presidential candidate, Bola Ahmed Tinubu has paid a visit to the Vice-President of Nigeria, Professor Yemi Osinbajo at his residence within the Aso Villa in Abuja.

According to Daily Post, Tinubu met with Osinbajo at the VP’s residence within the Aso Villa in Abuja. Osinbajo had lost the party’s presidential primaries to Tinubu, and in a video clip, Tinubu appeared to snub the Vice President before the intervention of House Speaker Femi Gbajabiamila.

MUST READ:  Onyii Alexx Shares Disturbing Video Of NDLEA Operatives Jumping Through The Fence Into Her Home

However, in his post-election speech, Tinubu assured his opponents that they had nothing to fear.

Meanwhile, Vice President Yemi Osinbajo, who is said to have had a friendly political relationship with Tinubu, has refused to bow out.

Many supporters of the former Lagos governor chastised Osinbajo for running for the APC presidential ticket alongside his former boss.

Osinbajo served as Lagos State Commissioner for Justice and Attorney General from 1999 to 2007, during Tinubu’s tenure as governor. He recently claimed he played a role in Osinbajo’s appointment as Vice President.

While there had been speculation that the election might have strained the relationship between the two politicians, Tinubu paid a visit to the Vice President on Thursday.