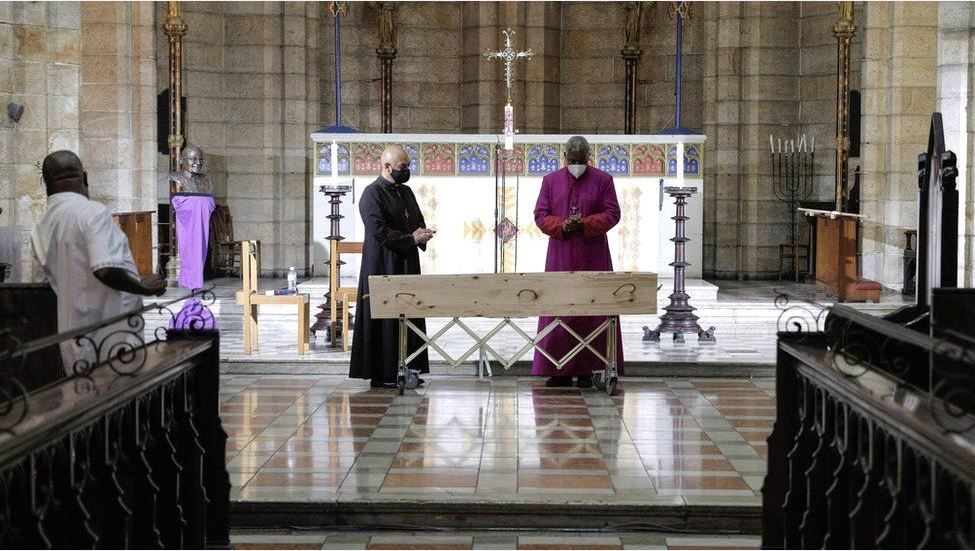 After the lying-in-state period, his official state funeral will be held on January 1st, allowing mourners to file past his body and say their final goodbyes.

Over the following two days, large people are anticipated to visit the cathedral.

“For fear of a rush,” a local priest told the media, the laying in state period had to be extended to two days.

As Tutu’s humble wooden casket was taken into the cathedral, priests burned incense.

Thandeka Tutu-Gxashe, Tutu’s eldest daughter, walked gently behind the coffin as it entered his former parish, surrounded by other family elders.

Leah, his frail wife, had already been wheeled inside the chapel.

The public will be able to pay their respects to the famous churchman, who was a driving force in the campaign to end the apartheid regime in South Africa, which was implemented by the white minority government against the black majority from 1948 to 1991.

There will be memorial ceremonies performed around South Africa, as well as a private night of remembrance with his close friends afterwards.

Archbishop Desmond Tutu’s remains will be cremated after the funeral on Saturday, and his ashes will be interred in the cathedral where he preached for many years.

Since his death, the cathedral bells have rung for ten minutes every day at noon.

In accordance with his wishes, the funeral will be simple.

“He requested that the coffin be the cheapest possible,” his foundation claimed, adding that he “did not want any ostentatiousness or wasteful spending.”

Related Topics:South Africa news
Up Next