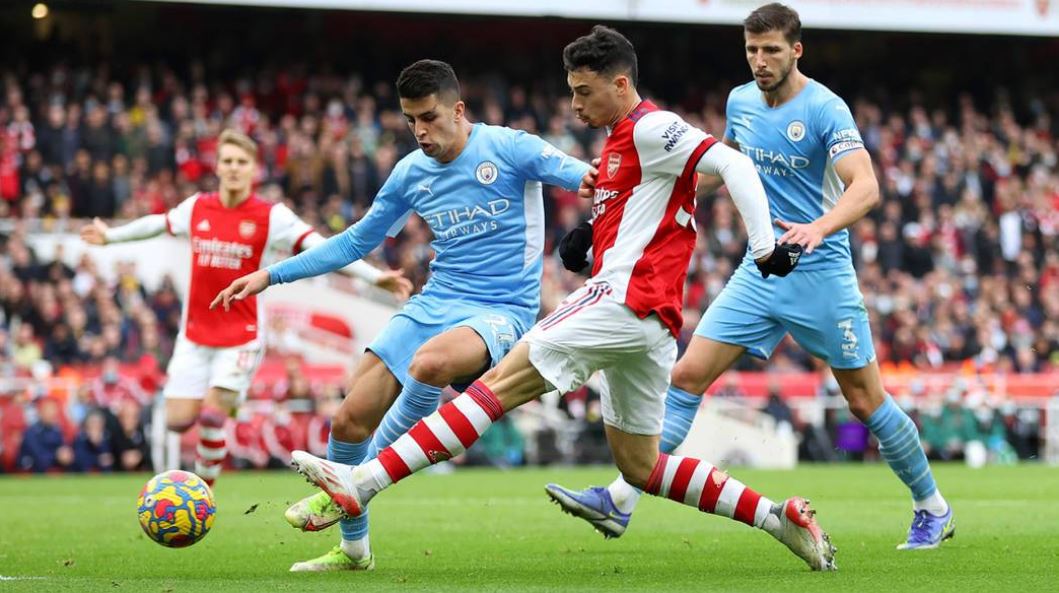 Arsenal 1-2 Man City-Arsenal were denied everything from a tense New Year’s Day clash versus City at the Emirates thanks to a heartbreaking injury-time goal.

How it unfolds Arsenal 1-2 Man City…

Arsenal drew first blood with a beautiful low shot from influential  Bukayo Saka who has now scored four goals in three Premier League games, but they could have been in front earlier had they been awarded a penalty after 10 minutes, Martin Odegaard collapsed in the area following a challenge from Ederson.

In August, the champions and leaders won 5-0 in the reverse fixture, and they got off to a little better start in the capital but the Gunners were better prepared as they restricted Pep’s men from causing any real threat with their possession football.

The in-form Kevin De Bruyne was next to try his luck, curling narrowly wide of Aaron Ramsdale’s top left-hand corner. Arsenal, who were without manager Mikel Arteta due to Covid-19, were jolted awake by that near-miss and scored shortly after the half-hour mark.

Kieran Tierney drifted forward following an explosive burst, and the left-back picked out Arsenal most influential player Bukayo Saka, who swept home from roughly 12 yards after finding himself unmarked, due to an Alexandre Lacazette run that blocked Nathan Aké.

Referee Stuart Attwell was summoned to the pitchside monitor early in the second half after Bernardo Silva went to ground in the box after a shirt tug by Granit Xhaka. The game was permitted to continue at first, but Stuart Attwell eventually made the call, and Riyad Mahrez dutifully sent Aaron Ramsdale the wrong way.

When a mix-up between Aymeric Laporte and Ederson resulted in the Spain international heading the ball over the onrushing goalkeeper, Arsenal should have retaken the lead almost immediately. Gabi Martinelli hit the post when it appeared like it would be easier to score on the follow-up, but Nathan Aké came back magnificently to scramble off the line. 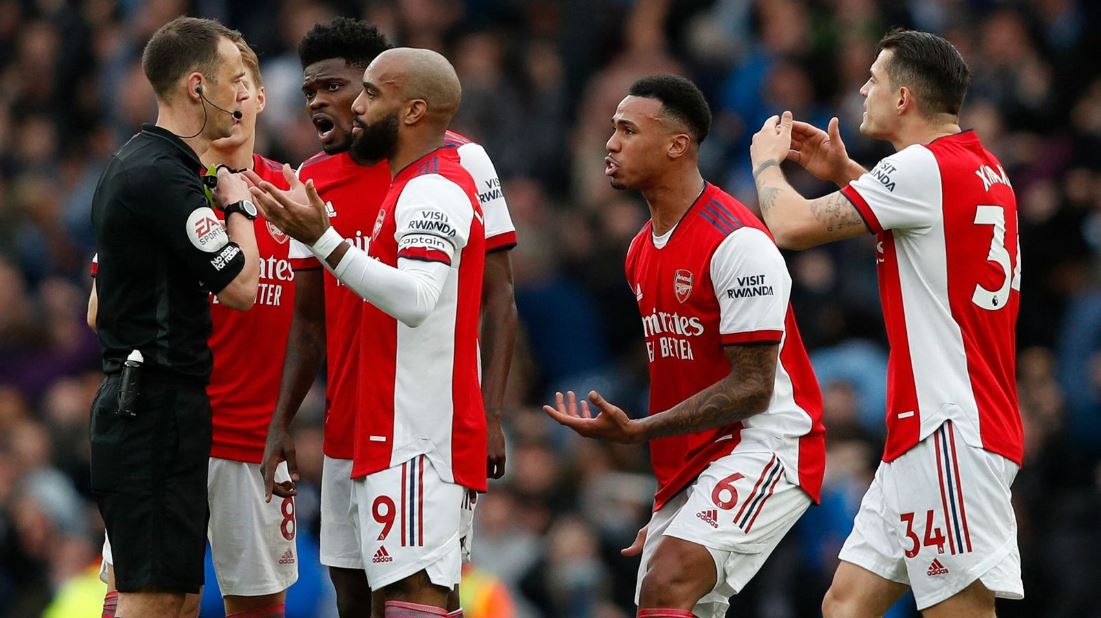 Gabriel was then sent off for a second yellow after raising his hands to knock over Jesus after being booked for scuffing up the penalty spot prior to Mahrez’s equalizer. Following that, the game became a little more cagey, with City pushing for a winner and Arsenal attempting to catch them on the break.

Kevin De Bruyne was instrumental in the victory by lofting a pass into the danger area. Rodrigo made his way down to Laporte, whose shot was deflected into the path of his teammate, who scored before celebrating in front of the enraged ‘Gunners’ supporters.

Manchester City now sits 11 points clear of Chelsea, who face fellow title challengers Liverpool in a pivotal clash at Stamford Bridge on Sunday, while Arsenal is still four points clear of West Ham United in fifth, but having played a game more than the ‘Hammers’.

Fulltime at the Emirates stadium Arsenal 1-2 Man City, a game the Gunners feel they deserved at least a point but football sport can be very cruel.

“They were better. We faced a team that in the past years struggled to be in the top four and they started the season being in the bottom. And now they’re in the four. They had six, seven days after the last game against Norwich… we had two days and a half and Brentford was so tough. And we didn’t have energy.

“We tried to put one more player in the middle to have more control, and more passes because we know the transitions with Saka, Martinelli, Lacazette, the physicality they have should be difficult and was difficult because we didn’t have anything.

“We tried and tried and in the second half, one minute changed it. The penalty and after the action for the own goal and the sending off… people will try to analyse many things, but the coin sometimes falls down on your side sometimes the other side. That’s the reality. At the same time, we know what it means to win here at the Emirates against Arsenal.”

Arsenal will be at home against Liverpool in the first leg of the Carabao Cup semi-finals  kick-off at 7.45pm while Manchester City’s next game is a trip to League Two Swindon Town in the FA Cup third round on Friday; kick-off at 8pm.