Watford 2-3 Arsenal: Gunners moved into the top four with a hard-fought win at Watford on Sunday in a topsy-turvy game at Vicarage Road.

In-depth match report as Arsenal boost their Uefa Champions League possibility with a 3-2 win over Watford; Martin Odegaard, Bukayo Saka and Gab Martinelli scored on each and as the Gunners moved up to fourth while Hornets in 19th fighting to stay in the Premier League. 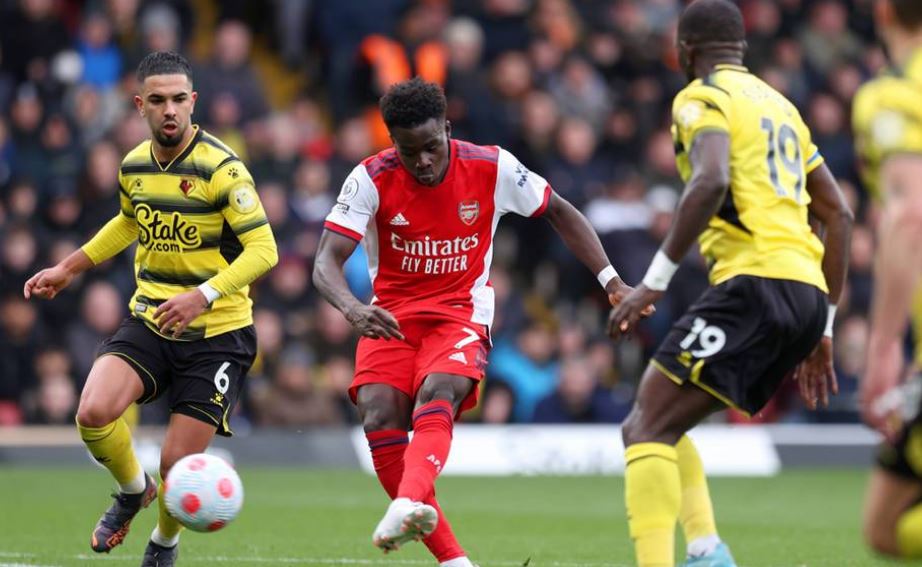 Arsenal beat Watford 3-2 to sealed fourth win on the bounce in the Premier League at Vicarage Road on Sunday as they maintained the pace in the hunt for a top-four finish.

Watford stormed out of the blocks and had the ball in the net inside a minute through Emmanuel Dennis, but the Nigerian’s celebration was cut short by the linesman’s flag. Martin Odegaard finished off a quick Arsenal move to put the ‘Gunners’ up inside five minutes, ensuring Watford would not keep a clean sheet at home for the second time.

MUST READ:  "Happy birthday to the woman that brings sunshine to my life"-Comedian AY extolled his wife 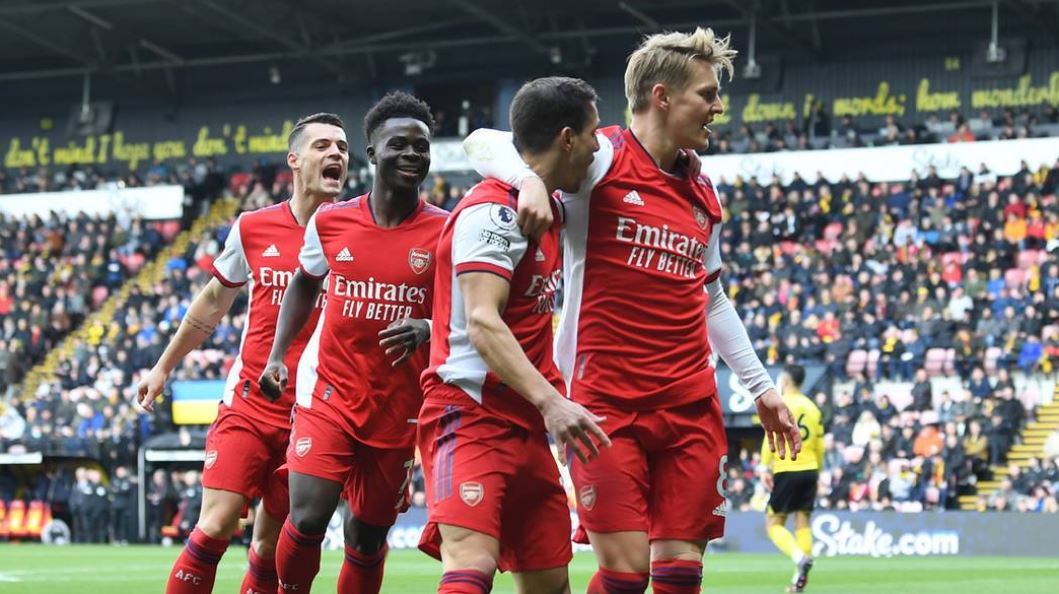 Aaron Ramsdale would also not be taking home a clean sheet, due to a superb finish from Cucho Hernández, who smashed a bicycle kick past the Arsenal goalkeeper. 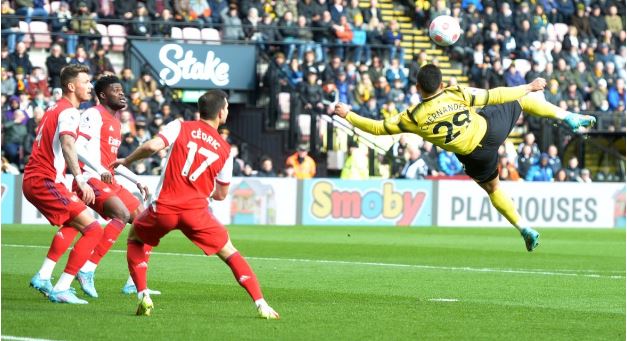 Bukayo Saka dispossessed Tom Cleverley of possession 25 yards from goal, played a lovely one-two with Alexandre Lacazette before blasting high into the roof of Ben Foster’s net to give Arsenal a half-time lead. Gabriel Martinelli got his name on the scoresheet as yet another free-flowing Arsenal move was completed with a superb finish from the Brazilian into the top corner, leaving Watford with a massive work on their hands if they were to take anything from the game.

Dennis squandered a golden opportunity for Watford by failing to make good contact with Kiko Femina’s enticing cross. Watford did get a late consolation goal from Moussa Sissoko, but that was it for the Hornets, who continue to have the poorest home record in the Premier League this season, with only seven points at Vicarage Road.

Arsenal now has four Premier League wins in a row and a provisional top-four berth ahead of the Manchester Derby, however with games in hand on their European opponents, Arsenal holds all the cards as they look to return to the Champions League for the first time since 2016/17.

Mikel Arteta and Roy Hodgson’s thoughts after the game…

Hornets boss Hodgson: We paid the price for our mistakes

Watford manager Roy Hodgson said: “On the whole, I thought we did about as well as I could have hoped against a very good team in top form. We worked very hard, and I’ve got no criticism of my players after that.

“We had what would have been a wonderful start with that early goal that was chalked off. I thought we did well to get back into it after they went ahead, and while the players’ efforts to get an equaliser at 2-1 led to their third, we kept going and made it an exciting finish.

“I didn’t think we made them work hard enough for their goals and we paid the price for our mistakes, but we were good value for our goals.

“We had the ball in their penalty area on a lot of occasions, and Arsenal had to defend quite desperately which is a sign that we retained a positive approach throughout.”

Gunners boss Arteta: We didn’t dominate and play the way we wanted

Arsenal manager Mikel Arteta was asked about his team moving into the top four, the Spaniard responded saying: “It is very pleasing. We know how difficult it is to be in this position in this league. We’ve earned it; we have come a long way as a team.”

That despite the flaws in their performance. Arsenal boss said: “We had great attacking moments, but I wasn’t pleased with our organisation.

“We didn’t dominate and play the way we wanted. Credit to Watford, but a lot of it was down to us; we should have done better and there is a lot to improve.”

Watford takes a trip to Wolverhampton Wanderers on Thursday in the Premier League (7.30 pm) while Arsenal plays next Sunday, against Leicester City @ 4:30 pm.