Arsenal gets a comfortable win over Aston Villa 3-1 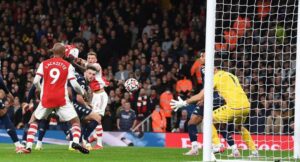 Arsenal gets a comfortable win over Aston Villa 3-1 on a fine night where everything seemed to click.

Arsenal bounded out of the gate, seemingly anxious to establish their dominance over the game right away. After running into the area, Aubameyang attempted an acrobatic effort, 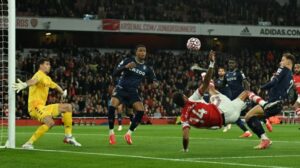 before Nuno Tavares blasted another chance high and wide in his maiden Premier League debut.

After a goal was disallowed for Pierre-Emerick Aubameyang due to a foul by Alexandre Lacazette in the build-up, Thomas  Partey hit the woodwork.

Alexandre Lacazette was a thorn on the flesh of Aston Villa’s defender, his good hustling caused Villa defence so much trouble.

This was the first time Emiliano Martinez has been beaten by an Arsenal player on Aston Villa shirt.

It should have been 2-0 moments later when Saka blasted too close to Emiliano Martinez. On the stroke of half-time, VAR intervened to award a penalty for a foul on Lacazette, doubling the lead. After Aubameyang penalty kick was beautifully saved, the rebound fell kindly back to him, this time he made no mistake to slot it into the net for Arsenal second goal of the night. 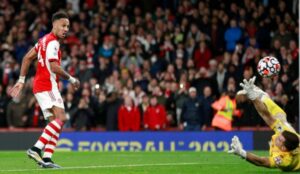 At half-time, Villa manager Dean Smith made a formation change, which nearly paid off when Ollie Watkins was denied by Aaron Ramsdale, but they struggled to keep up with the hosts, who moved the ball at a frighteningly fast pace. Smith-Rowe was the major protagonist, and he scored the third just before the hour mark, clanging a deflected shot home off the post after a quick counter-attack.

Despite the score, the visitors rallied, and Jacob Ramsey pulled a goal back with a screamer from 18 yards out that arrowed into the top corner, Aaron Ramsdale could do nothing about it. In a tense last ten minutes, Tyrone Mings flashed a shot past the far post, and Ramsey dragged another effort wide, as Villa lost their third league game in a row for the first time since July 2020.

NEWS FROM THE TEAMS BEFORE KICKOFF

For the visit of Aston Villa, Arsenal made three changes, with Alexandre Lacazette making his first Premier League start of the season. Lacazette earned a recall after coming off the bench to score a last-gasp equalizer against Crystal Palace on Monday night.

With Kieran Tierney out with an ankle injury, Albert Sambi Lokonga replaced Nicolas Pepe and Nuno Tavares made his complete league debut.

Villa kept their starting lineup from last weekend’s loss to Wolves, however, Leon Bailey returned to the bench after a hamstring injury.

BOTH MANAGER’S THOUGHTS AFTER THE MATCH

“[Arsenal at their best] was extremely close to that. The team’s reaction to Monday evening was my favourite part. We had to admit that it wasn’t good enough. We’re the league’s youngest team, but that’s no excuse. We are powerless to alter the passage of time. We need to instil confidence in them that they can play at this level because they can.

“For me, it was a punishment. VAR gave us nothing against Palace, and regardless of the timing, I thought it was a penalty.

“It feels good to be back in the top half of the rankings. We’ve had a difficult start, but I’m pleased with the performance and the outcome today.”

Aston Villa boss Dean Smith: “The first half was dreadful. We haven’t seen a Villa team like this in a long time. They deserved to be punished. We were physically dominated. I would have backed us if we had gone into the halftime break with a 1-0 lead, but 2-0 was difficult to cope with.

NEXT UP: Arsenal face Leeds in the third round of the Carabao Cup on Tuesday night at Emirates Stadium, before hitting the road to take on Leicester City next weekend.