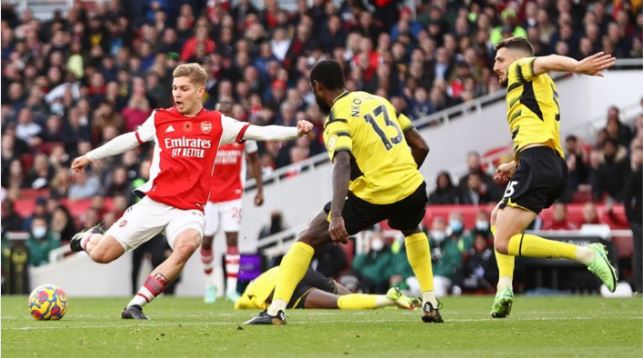 Today’s game was the 100th for Mikel Arteta as Head Coach of Arsenal and only a victory will make his milestone memorable, which is team delivered.

Arsenal gets over the line with a 1-0 victory over stubborn Watford, the Gunners has now extended their unbeaten run to eight games in the Premier League.

It was an intriguing contest between both sides, although Arsenal was far much the better side.

Arsenal dominating the game with so much possession of the ball, Watford was defending so deep waiting for a breakthrough counter-attack.

Arsenal seems well drilled and prepared for Claudio Ranieri’s quick transitioning play, as they coped so well with it.

Bukayo Saka took advantage of some shoddy goalkeeping to put the ball in the back of the net for the in-form ‘Gunners’ within ten minutes.

The goal was disallowed a few minutes later because the England international was offside, but the hosts were off to a good start. Mikel Arteta’s team had to wait for their next opportunity, which came from a penalty kick.

Pierre-Emerick Aubameyang has seen two of his penalty spot-kick saved by Goalkeepers this season, though the first he converted from the save made by Emiliano Martinez of Aston Villa.

Ben Foster the veteran playing his 500th game today, has now saved eleven penalties, and he was in action again before half-time, making a remarkable reflex save to deny  Arsenal defender Gabriel fine header.

Claudio Ranieri’s team had done well to keep the score equal at halftime, but their resistance was shattered early in the second half.

On his superb run, Ben White broke forward from the back and dodged tackles, with the ball finally falling to Emile Smith Rowe, who stroked the ball into the bottom corner.

The 21-year-old has now scored in three consecutive games, demonstrating that he has bounced back strongly after being left out of Gareth Southgate England’s team for the upcoming international matches.

Finally, Arsenal has their noses in front, which they well deserved considering the pressure they have put on Watford.

Substitute Martin Odegaard thought he’d doubled his team’s advantage, but his goal-bound shot was pushed home by Aubameyang from an offside position, resulting in the goal being disallowed.

Josh King had a glorious opportunity to level the score when he was let through after a miss up between Ben White and goalkeeper Aaron Ramsdale but the striker did poorly with the chance, hitting the ball to the side net.

Claudio Ranieri has not enjoyed a great deal of success playing Arsenal team over the years, his only success was in a champions league quarter-final match at Highbury after a 1-1 draw at Stamford Bridge two weeks earlier.

Watford’s afternoon was made worse when Juraj Kucka was sent off in the 90th minute for a reckless challenge, but the hosts hung on to extend their excellent record against the ‘Hornets,’ having won the last four Premier League head-to-heads. Meanwhile, Ranieri’s side has failed to score in each of their last six league defeats.

READ WHAT BOTH MANAGER’S SAID AFTER THE GAME…

“I am really happy about the result and the performance in the match. We should have scored many more goals but today was about being consistent in everything we wanted to do in this game.

“I have to defend my players, team and club. We are the most honest. At some stages, we can even be naïve. I’m sure there was no intention to take advantage. I focus on the performance and want to talk about what we did. It’s great for any team to win before the international break.

“Hopefully when they’re back we maintain that. Aubameyang will stay on penalties if he’s happy.”

Watford manager, Claudio Ranieri: “We were playing very well. Everybody expected the Arsenal players to give the ball back to us. We put the ball out because there was an injury to an Arsenal player. It was very strange. It’s ok, that’s football… I’m very satisfied with our performance. In the first half, it was a very tactical match and we tried to close all the situations. Foster saved the penalty very well and we made some mistakes on the counter-attack. In the second half, after the goal Arsenal had more space but we had the chance to draw the match.

After the international break, Arsenal takes a trip to Liverpool on Saturday, November 20, for a 5.30 pm kick-off. Watford are home to Manchester United at 3 pm on the same day.