Arsenal 3 Liverpool 2:In a five-goal thriller at the emirates stadium, Bukayo Saka and Gabriel Martinelli’s goals see the Gunners climb to the summit of the Premier League. 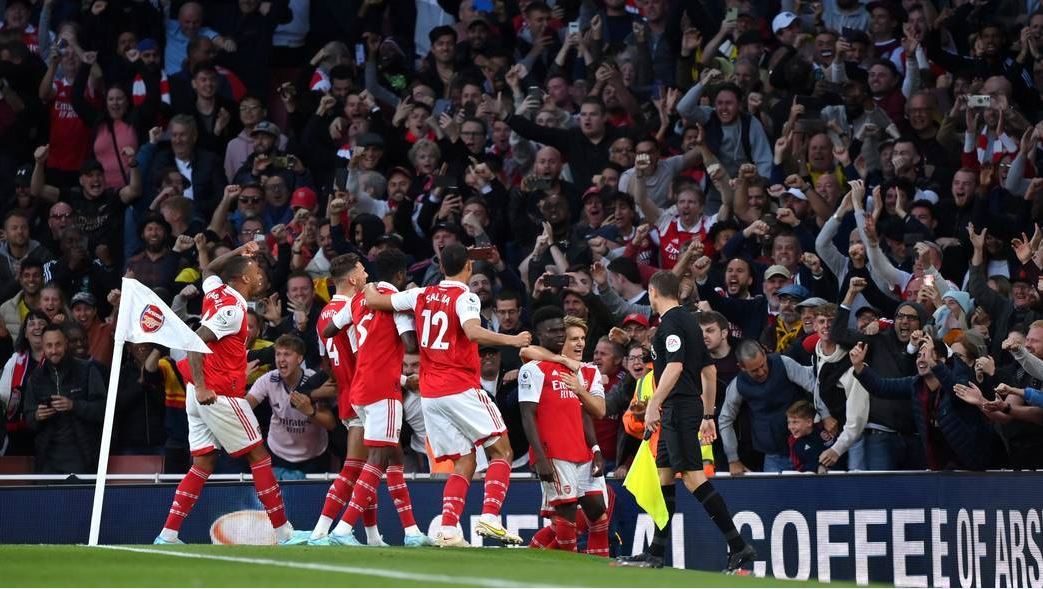 Bukayo Saka’s goals in either half of the game and Gabriel Martinelli’s brilliant goal took Arsenal to the top of the Premier League(PL) and a statement message to their doubters.

Despite being pushed back twice, Arsenal came away with all three points in a five-goal thrilling match at Emirates Stadium.

Gabriel Martinelli put the home side ahead in the first minute, setting the tone for a tense Premier League encounter. 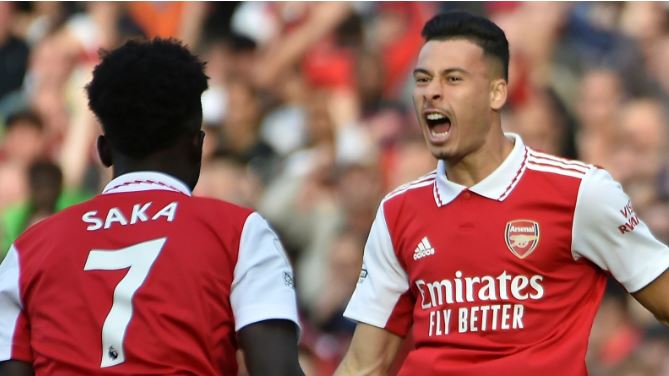 Liverpool equalized midway through the half through Darwin Nunez, but deep into first-half injury time, Bukayo Saka restored Gunner’s lead after a quick counter-attack.

Liverpool equalized through frequent nemesis Roberto Firmino, but Saka scored from the spot after Gabriel Jesus was fouled to secure a huge three points and return Arsenal to the Premier League summit. 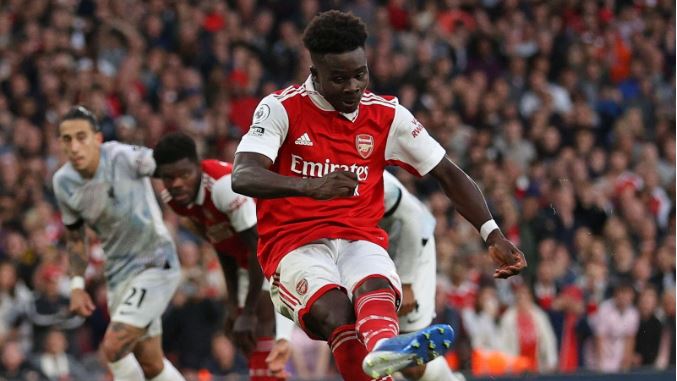 The perfect start for the home team…

The home team broke through with only 58 seconds on the clock. William Saliba won the ball midway inside Arsenal’s half, igniting a counterattack. On the left,

Arsenal overloaded Liverpool, and Martin Odegaard slipped the ball through to Martinelli, who expertly tucked the ball home, beating the offside trap.

The stadium was rocking, and the team tried to keep the early fervour going by snatching into challenges and buzzing around the Liverpool midfield.

Granit Xhaka had a shot saved but was flagged offside, and Martinelli overhit a cross after good work from Bukayo Saka.

MUST READ:  Leciester City Ndidi to miss rest of the season

At the other end, Aaron Ramsdale reacted quickly to deflect a Darwin Nunez shot, then sprung to his left to keep the ball out when Saliba diverted a cross towards his own goal.

So perhaps there were warning signs before Liverpool drew level. Gabriel’s attempted clearance was incomplete, and the ball fell to Luis Diaz, who played it across for Nunez to score.

But Arsenal finished the half exactly as they began. This time, it came from a Liverpool free kick, which Arsenal cleared to the box before launching a quick attack upfield.

Jesus won the ball and sent Martinelli scurrying down the left flank; his low cross went all the way to the far post, where Saka was sliding in to tuck home on the stretch.

Arsenal scored in the opening and closing minutes of the half. It relieved some of the pressure the home side was feeling and allowed them to enter the break on a high note.

Both managers speak after the game 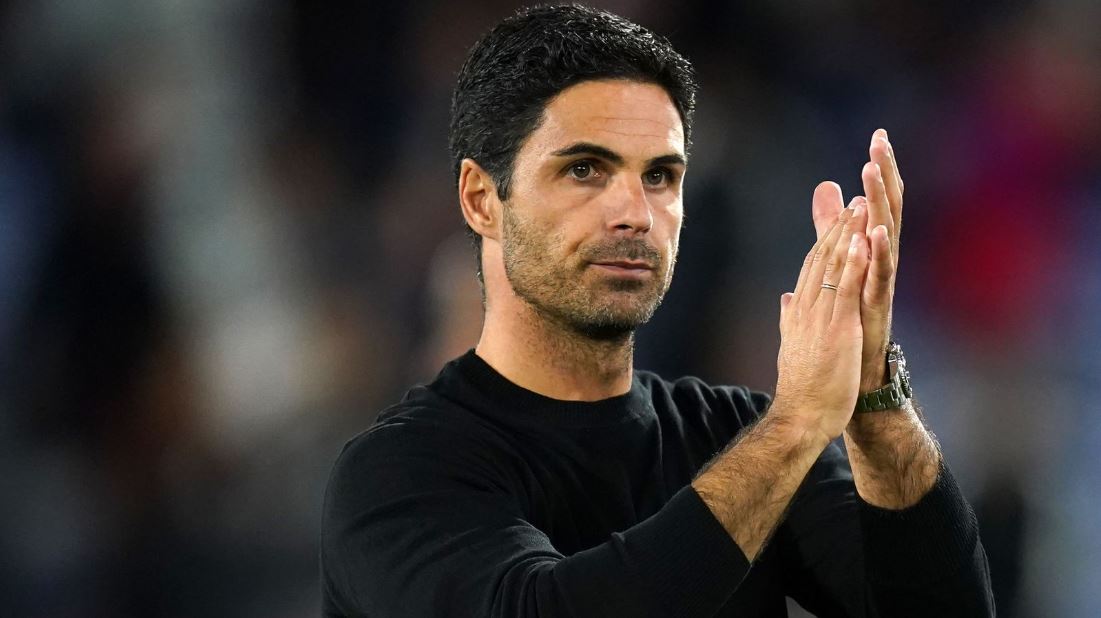 Arsenal boss Mikel Arteta’s post-match reaction: “It feels great [beating Liverpool], especially the way we won the game, the way we played, the atmosphere, I think we deserved to win the game.

“There were a lot of moments, the way they can open you up and exploit the space. They were very efficient with the chances they had. But we showed a lot of composure and character in difficult moments to overcome them, especially in the second half.

“It was a lively half-time team talk, but I wanted to give them some encouragement and confidence the game was there for the taking. There were obviously a few things we had to adjust and be better at; more composure and more courage to play.

“Everything was better in the second half. The organisation, the timing of the press, we won every duel and second ball. I was really happy with that.”

Jurgen Klopp: A draw would have been a deserved result 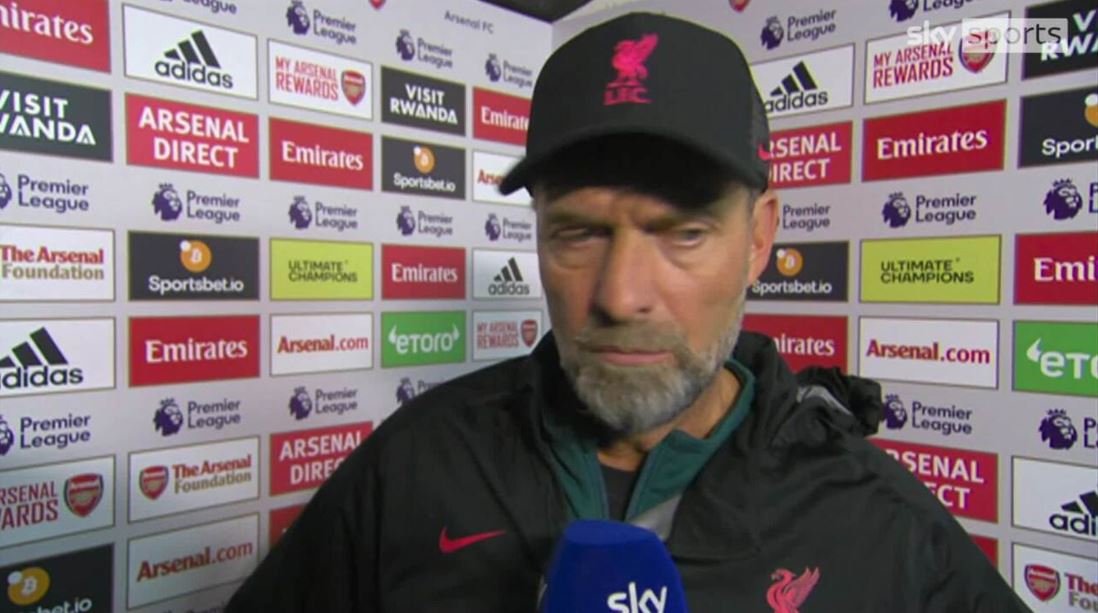 Liverpool boss Jurgen Klopp’s post-match reaction: “We’re not in the title race. Imagine I would sit here and think we’re nearly there, wait. We have problems at the moment but we caused the team in form, the leader of the table, massive problems today. Even in a really bad situation for us, with early changes and stuff like this we caused them real problems. We have to continue. We will go out there and fight. We are not here for being happy with the situation and thinking about last year.

“Very disappointed. Around all three goals we made decisive mistakes. The first goal is not what you need. A bad start. We start controlling the game against a very aggressive, full-of-confidence Arsenal side. We showed we’re here for a reason, scored an equaliser, a wonderful goal. Then it’s an open game and advantage for us. Then we make a bad decision before half-time, what are we doing? Worst possible start, worst possible end.

MUST READ:  Liverpool to clash with Real Madrid in CL last 16 (full draw)

“Luis Diaz we had to change, something with the knee, not good. He will have a scan. On top of that, Trent is bad with his twisted ankle. Trent never in seven years went off if he could play on. Much pain, swelling immediately…

“Arsenal came out very aggressive [for the second half]. We scored an equaliser, then it was a really open game, with slight advantage for us. Then the penalty happens. He thought immediately it was a penalty, which was interesting. [VAR] Mr England had a look and if two refs think the same it’s the truth we have to live with. If there was contact – and I’m not sure there was but there might have been soft contact – the player goes again on both feet and then down and that’s an indication something might have been made up… But not for the refs. But they thought it was clear not a handball in the first half when Diogo put the pull on [Gabriel’s] arm. We can not change that.

“Our situation now is a really difficult one. With injuries on top of that. These decisions go against you, it’s kind of typical but doesn’t help. We’ve lost the game with a lot of good moments, and could have got a result. A draw would have been a deserved result.”

What this result means 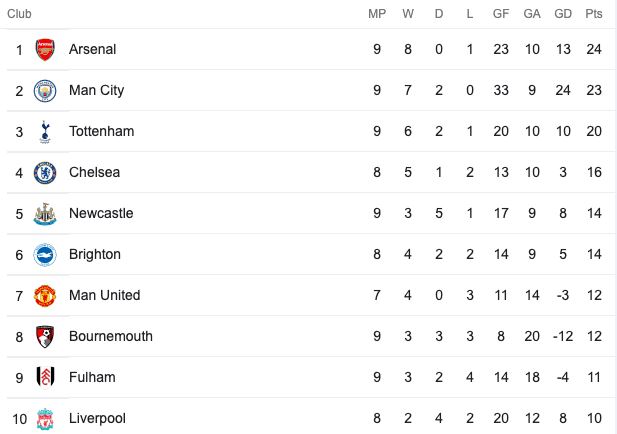