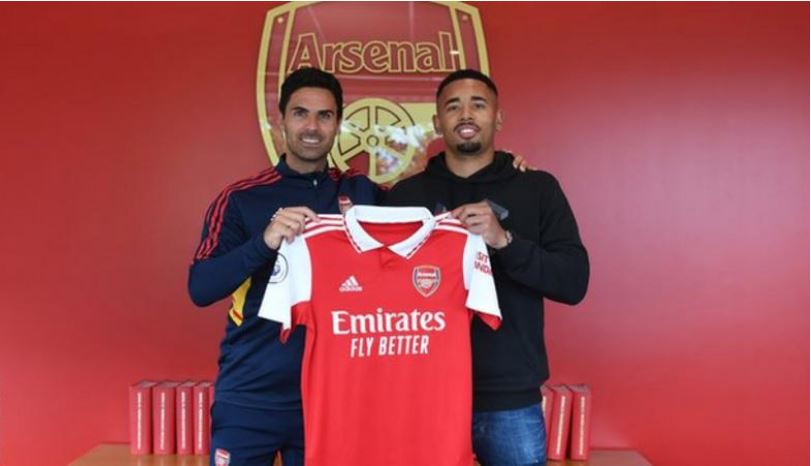 Arsenal has completed the signing of  Brazil forward Gabriel Jesus from Manchester City for £45m on a long-term deal.

“The club has done a tremendous job to recruit a player of this stature,”

Jesus has won four Premier League titles, three FA Cups, and three League Cups to his name. He has been a regular for the Brazilian national team, making 56 appearances and scoring 19 goals since his full international debut in September 2016.

He was a member of the 2019 Copa America winning squad. The 25-year-old has also won a gold medal at the 2016 Rio Olympic Games and appeared in the 2018 FIFA World Cup during his international career.

Jesus progressed through Palmeiras’ youth system, signing a youth contract in 2013, and his prolific goalscoring ensured he quickly advanced into the first-team squad, making his debut as a 17-year-old in March 2015.

MUST READ:  Pregnant side chic exchanges words with legal wife as she forces herself into lover's matrimonial home(Video)

He was a key member of Palmeiras’ Campeonato Brasileiro Serie A-winning team in 2016 when he was named the league’s Bola de Ouro – Player of the Season.

Arteta, who worked as an assistant coach with Jesus at City, has been trying to bolster Arsenal’s attacking options following the free transfers of forwards Alexandre Lacazette and Pierre-Emerick Aubameyang.

“I know Gabriel personally very well, and we all know him well from his time in the Premier League and being really successful here,” the Gunners manager said.

“This is a position that’s been on our radar for a long time now and we have managed to get a player that we all wanted, so I’m really happy.”

Jesus, who will wear the number nine shirt for the Gunners, leaves City after five-and-a-half years.

He made 236 appearances and scored 95 goals for them, winning four Premier League titles, three League Cups and the FA Cup.

Jesus said, “It’s been a pleasure to play for Manchester City.”

“I feel like I am a better player now than when I arrived – and to win 11 trophies has been amazing. My four Premier League titles are particularly special for me.

“I want to thank everyone at City – the manager, my teammates and the fans – for all the support they have given me over the past five-and-a-half years.”

Jesus assisted eight league goals for Manchester City in 2021-22, tying him with Kevin de Bruyne for most of any player at the club.

Thanks Man City and all the people who made this club my life for all these years. Time to live a new dream!

After finishing fifth in the Premier League and missing out on Champions League qualification last season, Jesus joins a club looking to boost their goalscoring threat.

He stated that he discussed the move with Arteta about “the club, the players, the project, and the future.”

“I believe 100% in Mikel,” the Brazilian said. “I had a very good time with him before, he’s a very good guy and a very good coach as well. He helped me a lot. We would always stick together after the training sessions and do some finishing or something.

“He’s a very intelligent guy and was an amazing player, so if he knows something, he can teach me or the young players.”

Arsenal Technical Director Edu who has backed the project of fielding young players said: “We are delighted that we have secured the transfer of Gabriel. Everyone who knows football well knows the qualities of Gabriel Jesus.

“Gabriel is a player who we have admired for a long time now. He is 25 years old and an established Brazil international who has consistently demonstrated that he is a player at a very high level. We look forward to seeing him join up with his new teammates ahead of the new season. We all welcome Gabriel to Arsenal.”