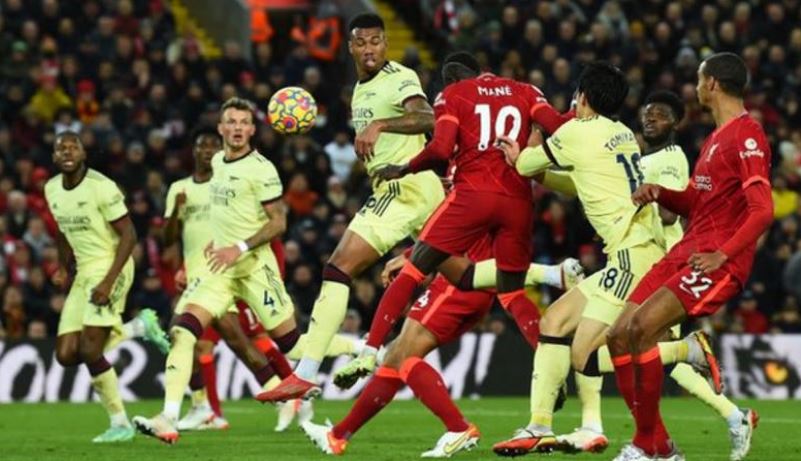 Liverpool brought an end to Arsenal 10-game unbeaten run in all competitions with a scintillating performance that saw the Reds put four goals past the Gunners at Anfield.

Arsenal unbeaten run ends after Liverpool 4-0 romp at Anfield. A game that showed Liverpool superiority over Arsenal. In every aspect of the game, the Gunners were second best and totally overrun by the Reds. The game also showed that Liverpool is far ahead of this young Gunners team and a lot still needs to be done by Mikel Arteta and his coaching crew to get close to Liverpool performance level. 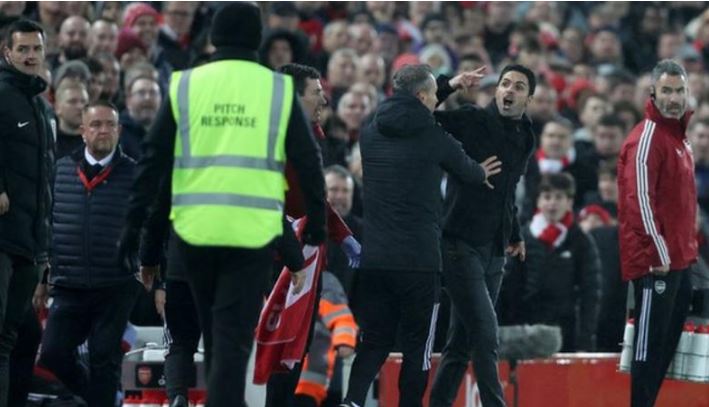 In spite of being unbeaten at home in their last nine games, Liverpool’s normal explosive start, which is known with Anfield matches played under the lights, was missing, and despite having the majority of possession, Arsenal appeared to be the more potent threat moving forward.

MUST READ:  Gunners ease to a 3-0 win over sloppy Saints

On 32 minutes, a seemingly minor challenge from Sadio Mané on Takehiro Tomiyasu triggered loud protests from both benches, with Mikel Arteta and Jurgen Klopp both receiving yellow cards for their roles in the fracas.

The coaches’ brawl gave the Kop a voice and boosted the home team’s offensive zeal. Mo Salah was denied from close range by Aaron Ramsdale, who then tipped over a Trent Alexander-Arnold left-footed drive. When Alexander-Arnold curled in a wicked free-kick from the right on 38 minutes, Mané escaped the offside trap to nod in a deserving opener, Arsenal’s resistance was finally broken.

Arsenal had held three clean sheets in a row prior to this evening, but the game’s unrelenting pace proved too much for the ‘Gunners,’ as they conceded a second goal just seven minutes after the restart.

Nuno Tavares charged out of defence with no clear plan of attack and, for some reason, passed the ball to Diogo Jota, who skillfully waltzed past Ben White and Ramsdale before tapping into an empty net. Arsenal’s night was made even worse as Mané set up a third goal for the visitors. On 73 minutes, Jota provided a slick headed through ball for the Senegalese striker, setting up Salah for a tap in.

Late in the game, Alexander-Arnold sneaked in behind a tired defence to cut back for Taki Minamino, who scored his side’s fourth goal with his first touch after replacing Jota.

Following their own unbeaten Premier League run being halted by West Ham last week, Liverpool exacted vengeance by destroying Arsenal’s unbeaten record and resuming their winning ways to cut the distance on Chelsea to four points.

Liverpool made two changes from the 3-2 defeat at West Ham, with Thiago Alcantara and Kostas Tsimikas replacing Jordan Henderson and Andy Robertson.
Arsenal’s only change from the 1-0 win over Watford before the international break is Thomas Partey, who replaces Ainsley Maitland-Niles.

NEXT UP FOR LIVERPOOL AND ARSENAL…

Liverpool takes on FC Porto in the Champions League group stages on Wednesday at 8 p.m., before Southampton visits Anfield on Saturday at 3 p.m. On Saturday at 12.30 p.m., Arsenal will play Newcastle in the Premier League.