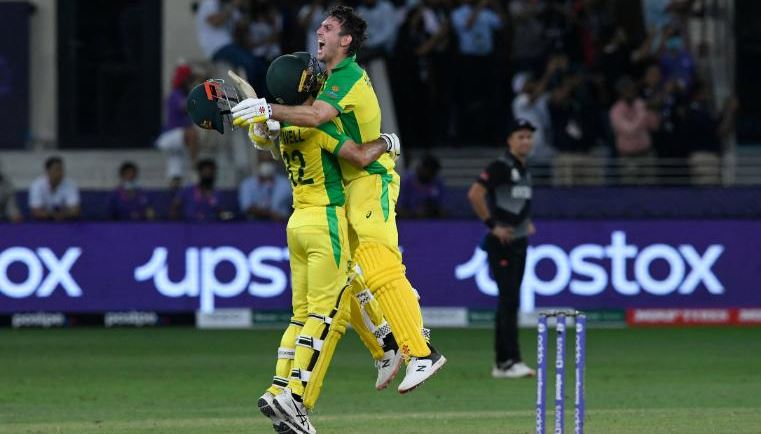 Australia gets a resounding victory over New Zealand to win its first T20 World Cup, by eight wickets in the final on Sunday.

Australia appeared to be cruising towards New Zealand’s 173 target — a score backed by captain Kane Williamson’s scorching 85 — with David Warner and Mitchell Marsh looking at ease at the crease.

With New Zealand spooked and some superb batting on display, Australia was able to take its first short-format title with ease.

With New Zealand spooked and some superb batting on show, Australia was able to take its first short-format title with ease.

Marcus Stoinis complimented the team’s mentality and passion for taking them over the line after racing onto the field to celebrate with Glenn Maxwell, Marsh, and the rest of his teammates.

He explained, “The secret is this group of boys, we truly adore each other.” “It’s stunning, and I can’t wait to keep playing with this group.” I’m incredibly proud of them.

MUST READ:  England players booed in hungary as they took a knee before their world cup qualifier match

“Apart from Mitch Marsh’s family, you won’t find a stronger fan of Mitch Marsh than right here.” We are so proud of him!”

HOW AUSTRALIA DID IT…

From the start of the final, Australia skipper Aaron Finch seemed to make the right option after winning the toss and opting to bowl.

New Zealand was restricted for runs due to a combination of strong bowling and a difficult pitch, with opening batsman Daryl Mitchell losing his wicket for just 11.
When captain Williamson was dropped on the boundary by fast bowler Josh Hazlewood, it was a turning point for New Zealand.

He had scored 21 runs off 21 balls at that time. After that, he went on a tear, hitting Mitchell Starc for 22 runs off a single over and reaching a 32-ball 50.

Howbeit, following magnificent innings of 85 runs off 48 balls, Hazlewood got the wickets of Glenn Phillips and Williamson in what proved to be a crucial over for Australia.

Jimmy Neesham and Tim Seifert guided New Zealand to a reasonable 172 after their 20 overs, putting Australia on the verge of winning its first T20 World Cup.

In reaction, Australia had a tense first over, with Finch surviving an early leg-before-wicket appeal in the first over after getting out on the first ball in the semifinal.

But he didn’t last long, as Trent Boult took the wicket, his short ball being caught in the deep by Mitchell.

Australia was able to rebuild thanks to a partnership between Warner and Marsh, reaching 82-1 at the halfway point and needing 91 to win.

As Australia maintained its march to win, Warner smashed an impressive 51 off just 34 balls, including a thunderous six.

With the game sliding away from them, Boult returned to the bowling attack and took Warner’s wicket, giving the Black Caps a ray of hope.
Marsh, on the other hand, reached his own half-century with his own massive six in the next over, reaching the target after 31 balls.

And with Maxwell’s help — as well as some wasteful New Zealand bowling — Australia cruised to win, with Marsh leading the way with 77 not out.

Although New Zealand’s search for a T20 World Cup championship continues, it is an iconic victory for Australia, which has won various formats of cricket but has yet to win the elusive T20 World Cup. 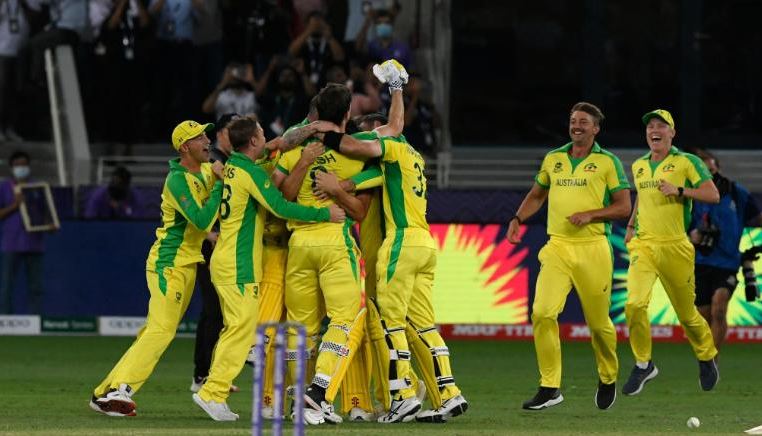 Leg-spinner Adam Zampa, who was the team’s best wicket-taker in the competition, was a critical element in Australia’s win.
He stated the circumstances in the UAE were something he tried to utilize after the final, in which he gave 26 runs off four overs with a wicket.

“All I tried to do was play to my skills to the best of my abilities.” “I anticipated the wickets would be low, so I bowled at the right times,” Zampa said.

“Because we won the toss and bowled first, it was maybe a little bit drier when I was bowling, and I wanted to get wickets when we needed them,” he said.
We’ve been in bubbles for almost two years, and that takes a toll on everyone, although our troops wouldn’t know it.”

Related Topics:T2O World Cup
Up Next