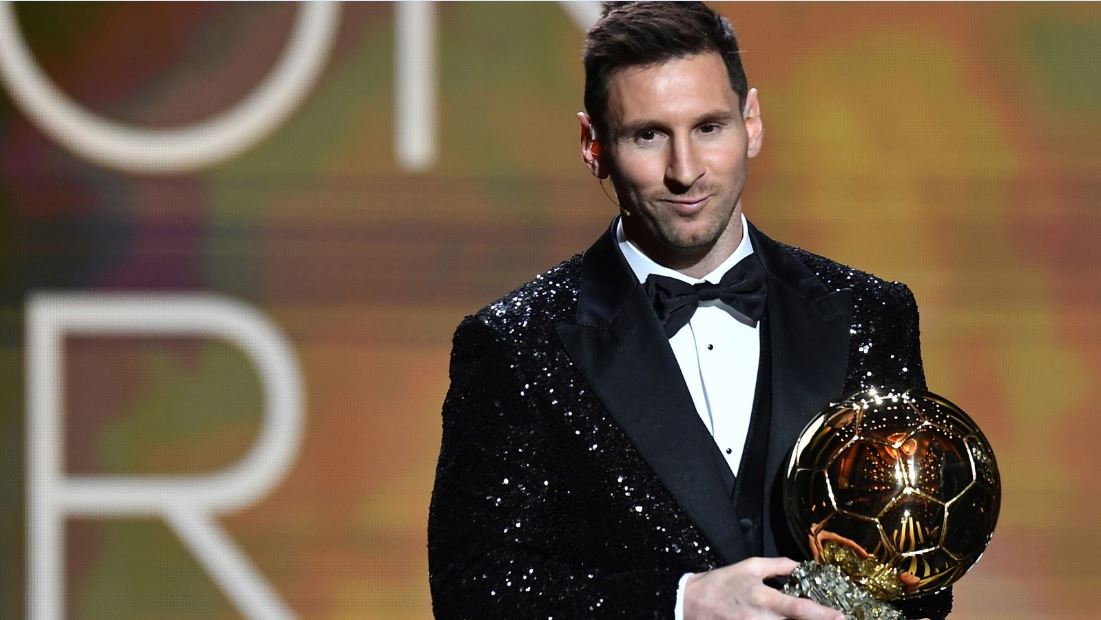 After another record-breaking year, PSG and Argentine international forward Lionel Messi was presented with the trophy on Monday night in Paris; Bayern Munich striker Robert Lewandowski, who was a favourite for the award in 2020 before it was canceled due to Covid-19, came in second, with Chelsea’s Jorginho in third.

Ballon d’Or:Lionel Messi wins it a record seventh time,after another record-breaking year for club and country, Messi, who left Barcelona as a free agent to join Paris Saint-Germain in the summer, was honored on Monday night in Paris with the trophy for best men’s footballer in the world.

Bayern Munich striker Robert Lewandowski and Chelsea midfielder Jorginho were his opponents but he beat the duo to emegre winner.

“I’m really proud to win the France Football Ballon d’Or once again,” said Messi. “It’s incredible to win it for the seventh time. I would like to thank my family, my friends and all the people who follow me and always support me, because without them I couldn’t have done it”.

“I would like to warmly congratulate Leo. “The club is immensely proud that one of our players has won this most prestigious and coveted title. Leo is making football history once again. Along with all our supporters around the world, we are delighted to be able to enjoy one of most iconic footballers of all time in the Rouge & Bleu shirt.”

Messi won the prize for a record sixth time in 2019, one ahead of great rival Cristiano Ronaldo, before the awards were canceled in 2020 due to the coronavirus outbreak.

Blues midfielder Jorginho,finished third following an outstanding year in which he led Italy to victory at the postponed Euro 2020 after winning the Champions League with Chelsea in May.

Chelsea also won the club of the year award for having most players nominated across all of the categories.

Final standings for the 2021 Ballon d’Or for Men…

Pedri, a midfielder for Barcelona and Spain, earned the Kopa Trophy, which is given to the finest player under the age of 21.

The 19-year-old was chosen ahead of England and Borussia Dortmund midfielder Jude Bellingham, with Manchester United’s Mason Greenwood and Arsenal’s Bukayo Saka coming in fifth and sixth, respectively.

After a great Euro 2020 campaign in the summer, Italy and PSG goalkeeper Gianluigi Donnarumma received the Yashin Trophy for best goalkeeper.

The Premier League goalkeepers, however, dominated the category, with four in the top ten.

Edouard Mendy, who won the Champions League with Chelsea last season, came in second, while Ederson, who won the Premier League title with Manchester City, came in fourth.

MUST READ:  Leciester City Ndidi to miss rest of the season

Prior, Ronaldo, who finished sixth, refuted comments made by French writer Pascal Ferre that his main goal in life is to win more Ballon d’Or awards than Messi.

Ronaldo did not attend the Ballon d’Or ceremony on Monday at the Théâtre du Chatelet in Paris, but he did answer on social media to Ferre, the editor of France Football, the event’s organizers.

“Pascal Ferre lied, he used my name to promote himself and to promote the publication he works for,” Portugal international Ronaldo posted on Instagram.

“It is unacceptable that the person responsible for awarding such a prestigious prize could lie in this way, in absolute disrespect for someone who has always respected France Football and the Ballon d’Or.”