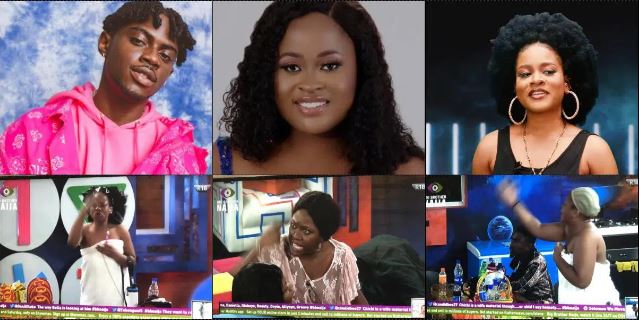 Big Brother Naija Level Up housemates, Amaka, Phyna, Bryann and Khalid all lost their cool as they got into an intense argument.

The trouble began when Bryann and Phyna had a disagreement about their morning group activities.

Phyna, who was wearing just a towel scolded Bryann for calling her input as stupid which prompted the former to call the other names.

“You are a stupid boy; there’s nothing in your head; useless entity,” she yelled.

Amaka, on the other hand, jumped into the fray to support Phyna as the other housemates became involved in the tense argument.

Khalid followed Amaka to the bathroom to continue the conversation, which devolved into another squabble between them.

Watch the videos below…

BBNaija Season 7:Who Dey Finish The Condoms In Biggie’s House-Amaka And Phyna Questioned(video)

BBNaija Season 7:Again,Daniella And Khalid Caught Making Out Under The Duvet[video]