Reports say the insurgents attacked the fleet along Maiduguri-Damaturu Road while it was travelling from Abuja for a presidential campaign in Maiduguri.

MUST READ:  President Buhari Orders All Ministers,Aides Pursuing Elective Positions In 2023 To Resign 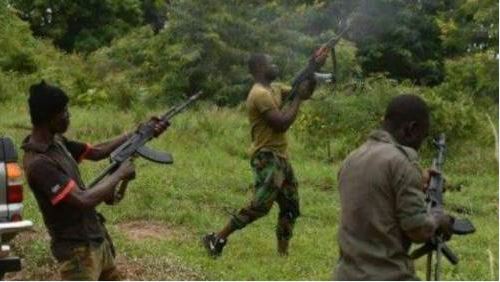 Reports say the insurgents attacked the fleet along Maiduguri-Damaturu Road while it was travelling from Abuja for a presidential campaign in Maiduguri.

MUST READ:  Infamous Cultist,Rasheed Oko-Ilu Arraigned In Court On Nine Counts In Osogbo

“The officers were from Abuja, not Borno command. They were attached to one of the presidential aspirants visiting Borno on Sunday but I can’t confirm which of the aspirants (was involved) currently.

“The insurgents also burnt two patrol vehicles they were travelling in. Two of the policemen died on the spot while one died later at the hospital. Four others are currently hospitalised,” a police source told SaharaReporters.

MUST READ:  Mercy Eke respond to a fan who said her only skill is being naked

Meanwhile, the attack has been claimed by ISWAP.

The group, however, claimed that seven police officers were killed in the ambush.

Boko Haram and its offshoot, ISWAP, have been extremely violent.

The Nigerian Army has claimed repeatedly that the insurgency has been largely defeated.

The terror group has killed over 100,000 people and displaced millions more, primarily in Adamawa, Borno, and Yobe states

Rain Of Naira In Delta:Ex Energy Commissioner, Jonathan Ukodhiko Gives N2million To Each Delegate To Win House of Reps Ticket