Over N10billion is being owed by the Government ministries, departments and agencies.

Officials of the Federal Capital Territory(FCT) administration have sealed off the Federal Ministry of Works and Housing situated at Mabushi in Abuja. 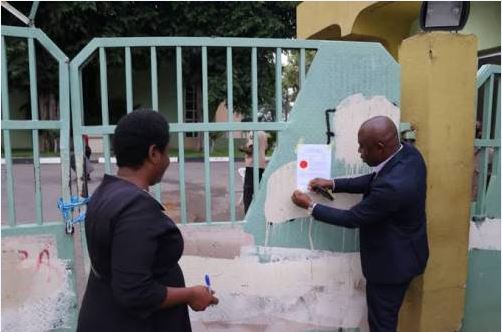 The exercise, which is part of its efforts to recoup approximately N10 billion owed to the Abuja Environmental Protection Board (AEPB), also impacted the popular Murg plaza, which is located just opposite the UTC Market, at Area 10, Garki, Merit House, and the Federal Character Commission, among others. The exercise was conducted early Tuesday morning by heavily armed security personnel drawn from the police, Nigerian Security and Civil Defence Corps, and other agencies.

The exercise was overseen by the Director of the Abuja Environment Protection Board (AEPB), Engineer Osilama Braimah, who also serves as Chairman of the Special Debt Taskforce, and the Senior Special Assistant to the FCT Minister on Monitoring, Inspection, and Enforcement.

Braimah claimed that government ministries, departments, and agencies owed him N10 billion, which he said was unacceptable.

He did, however, imply that some ministries were frantically attempting to pay, while others showed signs of unwillingness to pay.

According to him, “The board got court orders to seal the premises.”

He said the exercise, which has just begun, will cover all public and private offices owing to the board.

A senior magistrate court sitting in Wuse II, Abuja, had served the defendants with the summons to appear before the court on March 30th, 2022, but they failed to honour the court.