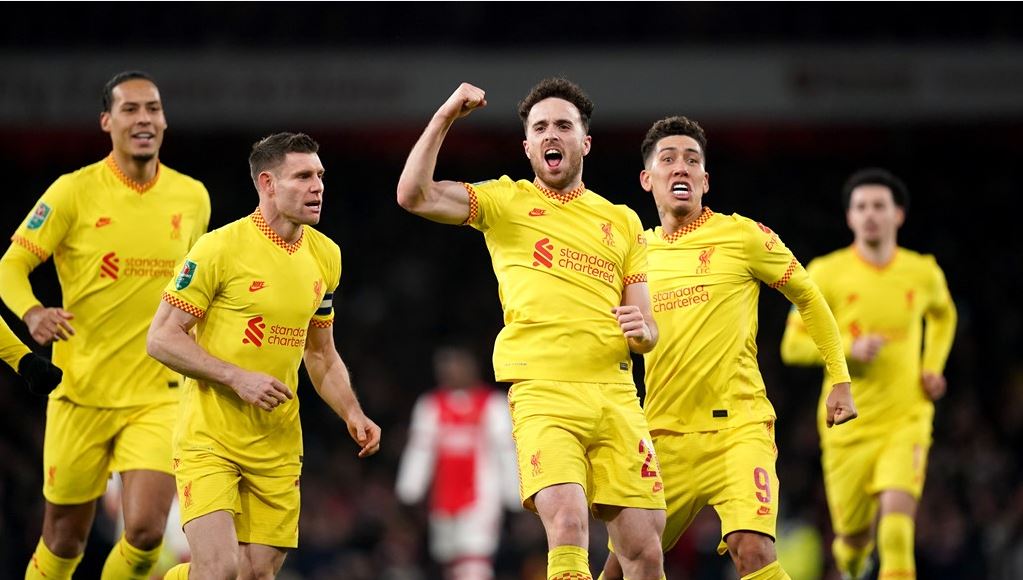 Diogo Jota brace steers  Liverpool to the Carabao Cup Final, the Reds will meet Chelsea at Wembley. Arsenal was quite impressive in the early stages of the game, Martinelli was a handful for Trent Alexander Arnold.

Arsenal had only won one of their previous 18 meetings with the ‘Reds’ in all competitions, and they will be frustrated not to have generated more chances in the game, which concluded in a rather pleasant night for Liverpool, as Diogo Jota brace steers Reds to cup final.

Mikel Arteta’s welcomes trio Tomiyasu, Emile Smith Rowe, Odegaard back to the team. Thomas Partey whose national team(GHANA) just got knocked out of the Africa Cup of Nations(AFCON) was named on the bench. All this was a boost for the Gunners but Reds was unconcerned with it, rather focused on defeating the Gunners that they achieved through Diogo Jota brace.

The yellow-clad side, though, would strike first, despite Jol Matip’s side-footed effort being called out for offside. Diogo Jota, on the other hand, was unstoppable moments later, as he scored his fourth goal in as many games against the London side after some deft footwork allowed him to float past Takehiro Tomiyasu.

Arsenal had not scored in their previous four meetings with Liverpool, and the remainder of the first half offered little promise of improving that unfavourable record, though Fabinho’s last-ditch challenge, following more Martinelli magic, prevented a certain goal before halftime.

The second half began with a flurry of action, with Lacazette squandering a fantastic opportunity to draw his team level before Kaide Gordon blazed an even more gilt-edged chance over the bar at the opposite end.

With the game becoming increasingly stretched, Liverpool struck the woodwork with Ibrahima Konaté’s header, and the away side squandered further chances to put the game out of reach.

After a brilliant crossfield pass from Trent Alexander-Arnold found Jota, the attacker made no mistake with his dinked finish to push Liverpool to the verge of cup triumph.

More misery was added when  Arsenal’s Thomas Partey was sent off with minutes remaining, also Granit Xhaka was sent off in the first leg at Anfield. This should be a concern for Mikel Arteta and his coaching crew. Meanwhile, Liverpool has advanced to their second League Cup final under Jürgen Klopp, though they will be hoping for better fortune this time after losing to Manchester City on penalties in 2016.

Jota is a world-class player, which he proved today against Arsenal. His finishing is exceptional unlike Arsenal strikers struggling to bury chances that came their way, noticeably the chance that fell to Lacazette. I think Liverpool schooled Arsenal today.

Diogo’s first goal was outstanding from him, the type of player he is. And again the second goal, he has done outstanding again. He is a world-class player in possibly the best form he’s found himself in at the club so far. Hopefully more goals for him and hopefully we’ll be able to get a win in the final.