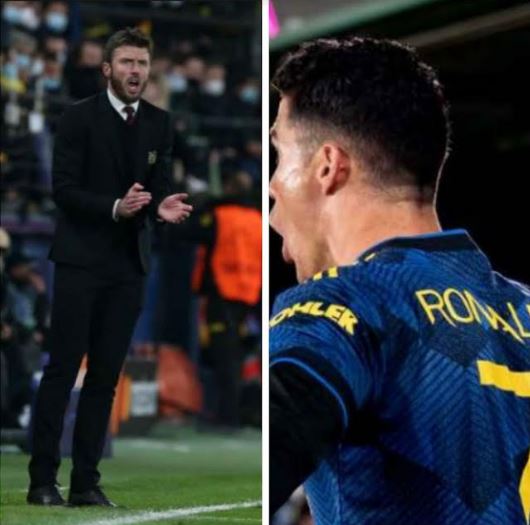 Michael Carrick took charge of his first game as Manchester United interim manager against Villarreal in the Uefa Champions League and secured the club’s first away win in the competition.

Carrick reigns at Man Utd begins with a 2-0 win over Villarreal in Uefa Champions League, goals came from Jadon Sancho who has struggled since making that big-money move from Borussia Dortmund and Portuguese international Cristiano Ronaldo.

The kick-off was about ten minutes late due to technical difficulties with the referee. When the game began, Villarreal made a strong start, having two good chances to grab the lead in the first ten minutes.

Moi Gómez had a shot saved by David De Gea from the edge of the box, while Yeremi Pino had a shot that went into the side netting. Interim manager Michael Carrick made four changes after the ‘Red Devils’ were defeated 4-1 by Watford at the weekend, and the team looked disjointed in the first half, with only one shot on target.

In the second half, Manchester United attempted to gain a foothold, but their build-up play went flat at first. When Manu Trigueros fired a volley in the box in the 59th minute, Villarreal thought they’d taken the lead, but Dea Gea produced a remarkable save to deny Unai Emery’s side.

In the 66th minute, Carrick introduced Marcus Rashford and Bruno Fernandes in an attempt to spark more creativity. Moments later, Jadon Sancho had a fantastic chance courtesy of a wonderful pass from Fernandes, but Gerónimo Rulli reflex save nullified the England international.

In the 78th minute, Cristiano Ronaldo came to the rescue once more, lobbing the ball over Rulli from the edge of the box after Fred had won it back, netting his 140th Uefa Champions League goal. Following a counterattack, Jadon Sancho sealed the three points in the 90th minute, scoring his first goal for the club.

Manchester United has booked a spot in the Uefa Champions League knockout stages courtesy of their 2-0 away win over Villarreal, putting their season back on track after a difficult few weeks. After a promising performance, Villarreal’s three-game unbeaten run at home in all competitions comes to an end, and they will now have to wait for another matchday to confirm their place in the next round.

A big moment for Sancho

“It will [give him confidence]. I think you’ve seen in the last couple of games that confidence more. Today, he kept running at players and he had that swagger that we often saw at Dortmund. He didn’t look to get the ball and turn back, he wanted to run at people and as a defender that’s a scary thing.”

Michael Carrick, the interim manager, has named Netherlands international Donny Van de Beek to start and Bruno Fernandes as a substitute in his debut Manchester United team for the Uefa Champions League match against Villarreal.

Van De Beek replaces Fernandes as one of four changes to the starting lineup that was thrashed 4-1 by Watford on Saturday, with Fred replacing Nemanja Matic and Anthony Martial starting ahead of Marcus Rashford.

The other alteration was the addition of Alex Telles to the left-back position, replacing Luke Shaw.

Unai Emery has named winger Arnaut Danjuma and midfielder Etienne Capoue in his starting lineup, although Paco Alcacer, who scored the game’s first goal at Old Trafford, is among the replacements.