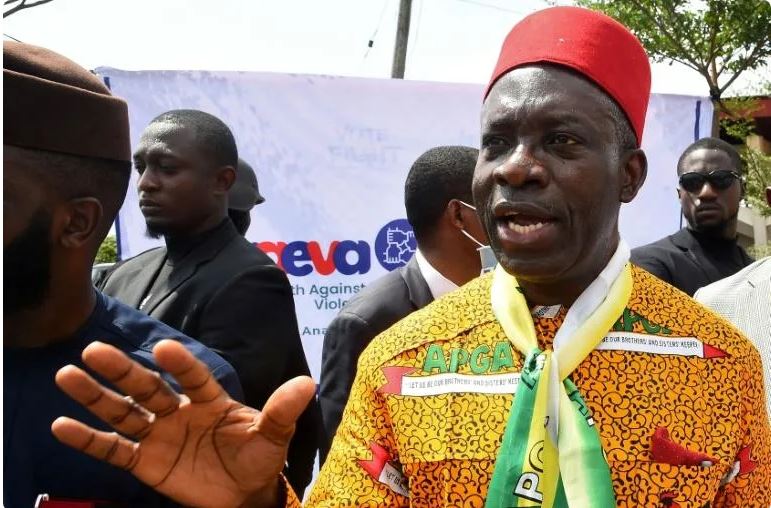 Charles Soludo,  candidate of the All Progressives Grand Alliance (APGA) and a former Governor of the Central Bank of Nigeria (CBN), has been elected governor of Anambra State after winning the supplementary election in the state’s Ihiala Local Government Area with 8,283 votes on Tuesday.

Andy Uba of the All Progressives Congress (APC) came in third place with 43,285 votes, while Ifeanyi Ubah of the Young Progressive Party received 21, 261 votes.

According to the Independent National Electoral Commission, Charles Chukwuma Soludo, an economics professor running with the Anambra powerhouse party All Progressives Grand Alliance or APGA, received the majority of the votes.

INEC said that Soludo, whose APGA party has governed Anambra for 16 years, received more than 112,229 votes, more than doubling his APC opponent and Senator Andy Uba.

In his victory speech Charles Soludo, charged his competitors to accept the verdict of the Anambra people, promised never to disappoint his people.

“To my fellow candidates in the election, I wish to congratulate you on the gallant contest. Our people have spoken overwhelmingly and surely, that voice is the voice of God. The ultimate winner is the Anambra people.

“We are all winners. I hereby extend my hands of fellowship to all of you. I need all of you to succeed. Politics aside, we are all brothers. Let’s come together for the Anambra project. There is enough room for everyone to contribute for the service of our land. I will need the guidance and contributions of everyone to succeed.

“With utmost humility and gratitude to God, I accept the result of the 2021 Anambra Governorship election as declared by INEC. This reflects the supreme will of the almighty God and an overwhelming sacred mandate of the people. For 12 years since the massive clamour by the people of Anambra for us to serve them, we persevered till this divine moment.

“This is a divine journey, whose time has come. To God be all the Glory and adoration. We have a very long list of persons, who God used to make this divine moment a reality.

Buhari congratulated Soludo on his victory, urging him to tackle challenges facing the state and the southeast.

More than 30,000 police and troops were dispatched to Anambra, a state in the southeast where the Indigenous People of Biafra (IPOB) movement is advocating for the creation of an independent state for the Igbo people.

IPOB has been implicated for a series of attacks on police and government offices this year, despite the fact that the outlawed organisation has denied involvement.

Apart from separatist agitation, Nigeria confronts other security threats in the run-up to the 2023 election, including widespread kidnappings by criminal gangs in the northwest and a long-running Islamist insurgency in the northeast.

MUST READ:  Terrorists Take Over 42 Communities In Kebbi, Occupy Houses, And Evict Over 10,000 Residents

On Saturday, Anambra’s gubernatorial election went off without a hitch, however, one local government was unable to vote due to security concerns.

That local government, Ihiala, voted on Tuesday, delaying the publication of the final results until Wednesday.

As a result, INEC was forced to prolong voting in some Anambra local governments.

Nigerian elections have been marred by allegations of fraud and violence since the country’s return to democracy in 1999 after a period of military dictatorship.

INEC came under fire during the 2019 election after being forced to postpone the poll by a week due to logistical issues.

Some of the elements that could have made Anambra more combative, according to SBM Intelligence risk consultancy head of research Ikemesit Effiong, did not come into play.

Just before the election, IPOB put off a scheduled rally.

Face and fingerprint identification technology, which was supposed to boost accreditation, had technical difficulties during Saturday’s vote. As a result, INEC was forced to prolong voting in some Anambra local governments.

“Some things didn’t go according to plan but a lot happened in the positive column and Anambra turned out to not be bad after all,” Effiong said.

But voter turnout was poor even by Nigeria’s low standards, at an estimated 10 per cent, according to SBM estimates based on returns against registered voters.

INEC has yet to give any official figure for voter turnout.

Charles Soludo may still face a legal challenge from rivals, but the loss will be a blow to the ruling APC, which had sought to consolidate its position in the southeast in the runup to 2023.

Economic growth in UK decelerates in the 3rd quarter