Chelsea 2-0 Tottenham Hotspur: Chelsea broke a four-game losing streak in the Premier League (PL) with a 2-0 victory against Tottenham Hotspur at Stamford Bridge, completing a season quadruple over Spurs for the first time since 2001/02.

In-depth match report of Chelsea 2-0 victory over Tottenham Hotspur at Stamford Bridge. Ziyech superb strike and Thiago header help Blues to initiate an 11-point gap to Spurs in the chase for Uefa Champions League spot on the Premier League table. 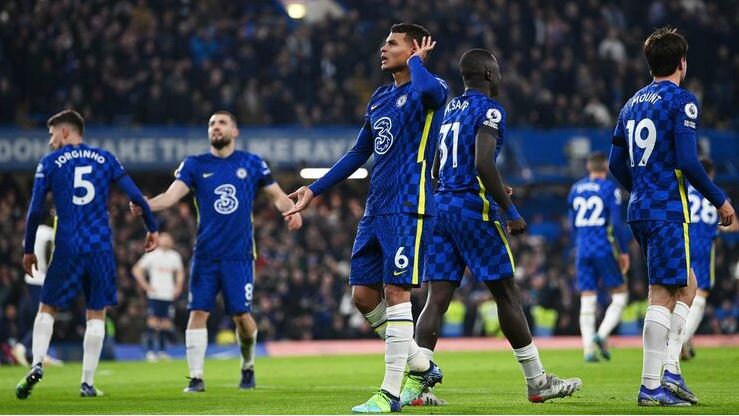 Chelsea tightened their grip on a top-three finish with a 2-0 victory over Tottenham Hotspur at Stamford Bridge, thanks to Hakim Ziyech’s stunning goal and Thiago Silva’s towering header.

Chelsea 2-0 Tottenham Hotspur: During the first half, chances were few and far between, owing to Antonio Conte’s aim for Spurs to shut out his former employers and prevent a fourth defeat to the Blues in 2021/22.

As in previous editions of fierce London derbies, squabble became the debating point. The first came after Matt Doherty’s late stamp on Malang Sarr midway through the half, but despite a VAR review, the Irishman was deemed not guilty.

The second goal came minutes before halftime when the visitors had a goal disallowed for a foul. Thiago Silva was caught off guard when Ryan Sessegnon slipped the ball behind him to Harry Kane, who went on to score, but the Brazilian took advantage of the England striker’s small nudge and went to the ground. The play was stopped by referee Paul Tierney, and the score remained 0-0 at halftime.

Chelsea was roused by that final fright, and they reacted with two sucker-punch goals at the opening of the second half. Hakim Ziyech opened the scoring, as he did against Brighton on Tuesday, with a beautiful curling strike into the top left corner, and Silva returned to haunt Tottenham after his earlier antics with a glancing header from a free-kick to make it 2-0 and become the joint oldest player in the Premier League with Ryan Giggs at 37 years and 123 days.

Tottenham Hotspur was unable to mount a comeback, as they famously did against Leicester on Wednesday, and suffered yet another away setback at the hands of their rivals. Meanwhile, Thomas Tuchel’s side has won back-to-back games after a three-game losing streak, pulling nine points clear of fourth-placed Manchester United.

“We were working extremely hard for it and it was a tough match. The effort was outstanding, and it was a deserved win.

“It is so hard to create chances against them, but we were relentless and kept on believing. Keep on going, there was no need for changes, some details of when to take the risk and when not. Encouragement to keep ongoing.

“I was right behind [Ziyech’s goal]. I had the feeling it was a bit too high, but it dropped at the right second. It was a brilliant goal. His technique was brilliant.

“The table is the table; it is our responsibility to prove ourselves every third day and now we have a break, and it was important to go into this break with a performance we want. We needed this but needed also to do things better. The guys are very tired because it was a long run for us.”

Tottenham Hotspur Antonio Conte speak: the gap between Blues and Spurs is big

“I don’t like to lose, and defeat is always difficult for me, but I think to have nine games in a row without defeat was important.

“At this moment, the gap with other teams like Chelsea is really an important gap and the team and the squad, the game was… I am proud of the effort.

“We tried to do everything but sometimes it is not enough, especially against a team like this. Now there is a big difference between us and the top teams.”

On Saturday, February 5, at 12.30 p.m., Chelsea will play Plymouth Argyle in the FA Cup fourth round. Tottenham will face Brighton in the same tournament at 8 p.m. on the same day.