The number of fatalities remains unknown as President Xi orders an investigation into the crash of flight MU5735 in Guangxi province. 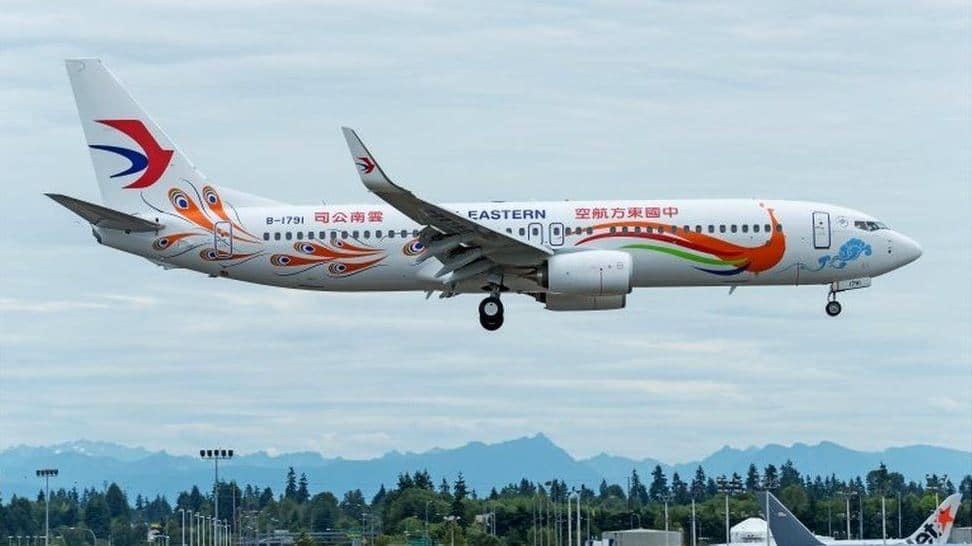 The China Eastern Airlines Boeing 737-800 was flying from Kunming to Guangzhou when it crashed and caught fire in Guangxi province.

The number of fatalities and the cause of the crash is unknown at this time. Rescuers have found no survivors.

Chinese airlines have a good safety record in general; the last major accident occurred 12 years ago.

The crash has shocked China, prompting President Xi Jinping to order an immediate investigation to determine the cause. All of China Eastern Airlines’ 737-800s have been grounded.

According to flight-tracking data, the plane dropped rapidly from its cruising altitude before crashing to the ground.

More than 600 emergency personnel are said to be on the scene. Firefighters were the first on the scene and were able to extinguish a blaze caused by the crash in the hills.

Local villagers’ footage, which was shared on Chinese social media and by state broadcasters, showed fire and smoke from the crash, as well as plane debris on the ground.

Following a series of accidents in the 1990s, China’s air safety and aviation standards have vastly improved in recent decades, and crashes like this are now extremely rare.

The country’s most recent major plane crash occurred in August 2010, when a flight from Harbin crashed in foggy weather in northeast Yichun, killing 42 people.

The airline “expresses its deep condolences for the passengers and crew members who died in the plane crash,” it said in a filing with the Shanghai Stock Exchange.

China Eastern is one of China’s three major airlines, serving 248 destinations via a network of domestic and international routes.

Only on Monday afternoon did the airline’s website go black and white, and it added a phone number for emergency assistance.

Over the last decade, the country’s airline industry has had one of the best safety records in the world.

The twin-engine, single-aisle Boeing 737 is one of the world’s most popular short- and medium-distance planes.

MUST READ:  Police Nab Cultists Who Beheaded And Played Soccer With Head Of Rival Cultist

According to Aviation Safety Network, China’s most recent fatal jet accident occurred in 2010, when an Embraer E-190 regional jet flown by Henan Airlines crashed on approach to Yichun airport in low visibility, killing 44 of the 96 people on board.

The deadliest Chinese commercial flight crash occurred in 1994, when China Northwest Airlines crashed, killing all 160 people on board.

Chinese President Xi Jinping called for “all efforts” towards the rescue and to find out the “cause of the accident as soon as possible”, according to CGTN.

“We are shocked to learn of the China Eastern MU5735 accident,” he said, calling for “the absolute safety of the sector and people’s lives”.

MUST READ:  NNPC completes removal of Dirty Fuel in Circulation

According to flight-tracking sites, the plane had been in the air for just over an hour and was on its way to its destination when it crashed in Wuzhou, a verdant, hilly area prone to mixed weather during China’s annual flood season.

The sky was cloudy, but visibility was said to be good at the time of the crash.

Social media has been flooded with footage purportedly of Flight MU5735 plummeting vertically from the sky.

According to flight tracker data, the plane dropped thousands of meters in three minutes.

According to FlightRadar24 data, the plane was cruising at 29,100ft when it was recorded at 9,075ft two minutes and 15 seconds later. According to the most recent information available, the flight ended at 14:22 local time, at an altitude of 3,225 feet.

“During the cruise stage, the plane is usually on autopilot.” So it’s difficult to understand what happened,” Li Xiaojin, a Chinese aviation expert, told Reuters.

According to Wang Ya’nan, chief editor of Beijing-based Aerospace Knowledge, “it is very likely that the aircraft lost power at cruising altitude, resulting in the pilot losing control of the aircraft.”

“This is a very serious technical failure in which the plane inevitably enters a high-speed descent.” 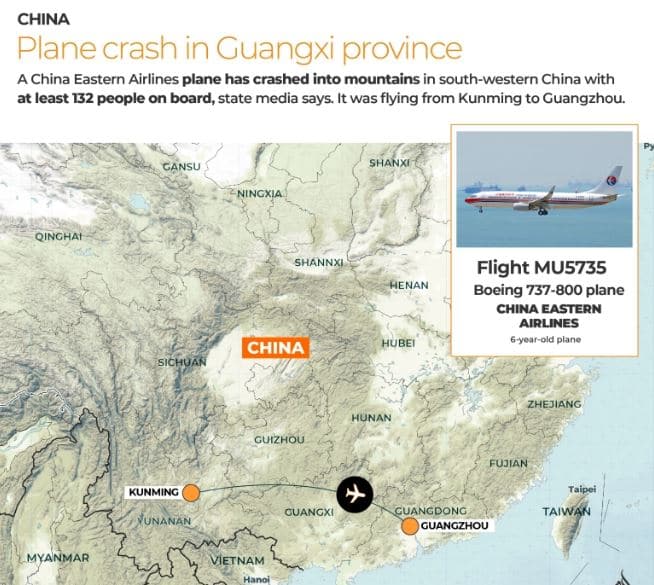