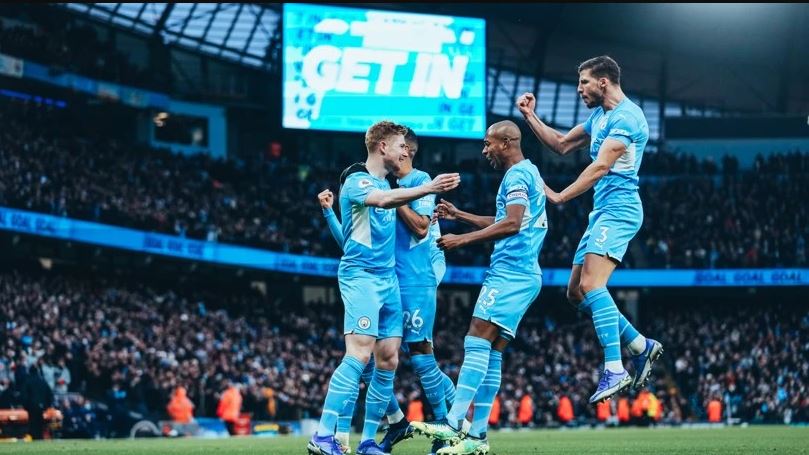 City held off an unexpected Foxes comeback to win their ninth Premier League game in a thrilling fashion and extend their lead at the top of the table to six points.

City fends off foxes comeback in a nine-goal thriller, it was goals galore at the Etihad stadium with a breathtaking attacking display from both teams.

The defending champions City appeared to have sealed up the points after only 25 minutes, leading a depleted Foxes team 4-0, with penalties from Riyad Mahrez and Raheem Sterling, as well as goals from Kevin de Bruyne and Ilkay Gundogan.

Foxes, on the other hand, had other ideas, scoring three goals in ten second-half minutes from James Maddison, Ademola Lookman, and Kelechi Iheanacho.

Aymeric Laporte’s header restored order and provided much-needed breathing space for the home side before Sterling’s second secured the points late on, but what had started off as a stroll in the park will be remembered as a much tougher test for the league leaders.

Second-placed Liverpool out of action due to a Covid-19 outbreak that forced the postponement of their match against Leeds, Pep Guardiola’s team had an opportunity to extend their lead over their nearest rivals, and they took advantage of it.

De Bruyne had time to bring down Fernandinho’s lifted pass into the area after the Foxes had already been fortunate to avoid some early pressure, and he made no mistake with a superb finish.

Soon after, when Youri Tielemans brought down Laporte at a corner, Mahrez made it 2-0 from the spot, and Gundogan scored a third after Kasper Schmeichel could only palm Joao Cancelo’s cross into his path.

After stepping up to take the penalty himself after Tielemans had chopped him down, Sterling added a fourth goal after just 25 minutes, and with the home side in such a vicious mood, it appeared it was only a matter of how many more goals would follow.

After the half, it was Leicester who delivered the dazzling attacking play, and a spectacular comeback appeared to be on the cards.

Iheanacho also set up their second goal, moving Lookman clear to blast past Ederson, before scoring himself to keep his side’s comeback going.

Ederson did a good job of tipping Maddison’s shot over the bar, but the rebound fell pleasantly for Iheanacho, who scored from close range.

Everyone in Etihad Stadium was taken aback, particularly the visiting Foxes fans, who had been joking about winning 5-4 after their first goal went in.

City stutter did not last long, as Laporte rose to nod in Riyad Mahrez’s corner five minutes later, and Sterling was in the correct place to turn in a Ruben Dias knockdown before the match’s end. City fends off Foxes unexpected comeback in a dazzling fashion.

City boss Pep Guardiola: “The game was open even at 4-0, it was not closed. They are a big club with quality. Second half they changed the shape.

“We know the quality they have in the build-up when Maddison can play and Tielemans can play and Kelechi and Lookman, the last six Premier League games we won five but so so difficult.

“They have an exceptional manager. Laporte slipped and Ruben had one yellow to be suspended and was not aggressive enough. “Then 4-1 and 4-2 and the mindset of the players changed. 4-3 the game was close to being equalised. We were more patient and they had two more chances and we had chances too and set-pieces we won the game.”

Foxes boss Brendan Rodgers: “It was a difficult start to the game for us, really disappointed with the penalty, really soft, so that was frustrating. We came in at half-time, the scoreline for me didn’t reflect the game. We had eight shots, they had nine, but we were 4-0 down.

We were in a tough position, but we make a change, and then we challenged the players in the second half to win the second half, bringing us closer to their goals, we have to show the mentality and character that is in this team.

“We never unravelled, that could have been an easy thing to do, down 4-0 to the champions but the players didn’t do that. We played some incredible football, disappointing to concede from a set-piece but we had two big chances at 5-3. Conceding two penalties and two from set-pieces is disappointing.” 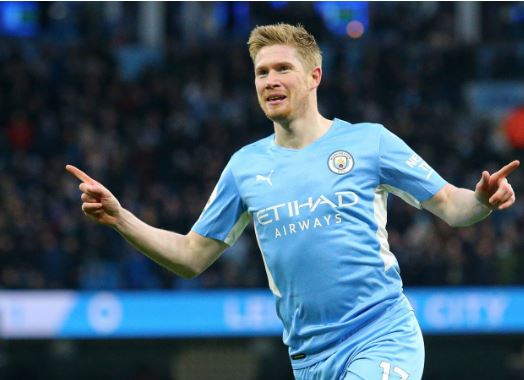