Manchester United 3-2 Tottenham Hotspur: Portuguese international Cristiano Ronaldo stole the show with his breathtaking hat-trick that lifts the Red Devils up to fourth in the premier league table.

In-depth match report, analysis as Cristiano Ronaldo’s hat-trick sank Tottenham Hotspur despite Harry Kane’s penalty and a Harry Maguire own goal for the away side at Old Trafford. United climb to fourth while Antonio Conte Spurs stay seventh. 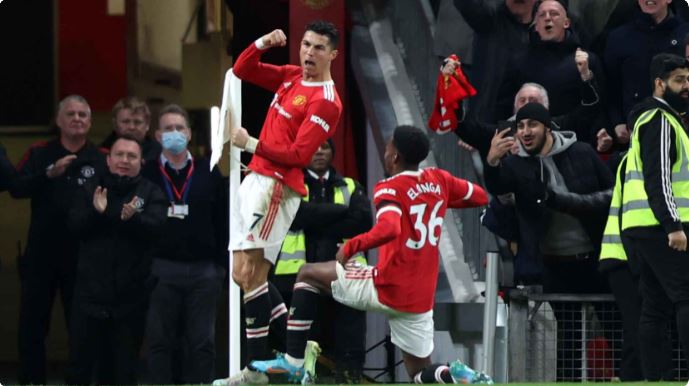 With two goals in the first half from Cristiano Ronaldo, Man Utd affirmed their dominance over Spurs in the race for a top-four spot.

Spurs responded twice, with a Harry Kane equalizer in the first 45 minutes and a Harry Maguire own goal in the second half.

But Cristiano Ronaldo’s one-man goal-show was far from over, as he powered in a headed winner nine minutes from time.

On his return to the team after missing the Manchester derby, Ronaldo scored three goals in three minutes to give United the lead. It was his first hat-trick since joining the club. The result propels Ralf Rangnick’s side into the top four, one point ahead of Arsenal, while Antonio Conte’s Spurs fall five points behind – albeit with two games in hand.

How it all happened in Old Trafford

To begin the match, it was chess-like, with both teams going forwards, diagonally, and backwards, looking for the ball that would open up the opposition. But we didn’t have to wait long for the game-changing move.

Ronaldo had an early snapshot smash against Eric Dier’s arm, but all penalty appeals were turned down, much to the chagrin of the striker.

The disappointment was short-lived, as Ronaldo was back in the thick of things in the 12th minute. This time, Fred’s exquisite flick around the corner put the Portuguese international in space around 30 yards from goal. Ronaldo unleashed a trademark clean hit that Tottenham goalkeeper Hugo Lloris couldn’t stop.

In the 16th minute, Paul Pogba gave Rodrigo Bentancur a crowd-pleasing dummy as he turned him, but his shot skidded wide as United stepped on the gas. Spurs responded and had a goal disallowed when Ben Davies slipped behind the Reds’ defence but, after beating David De Gea, the assistant referee correctly raised the flag.

After 26 minutes, a Son Heung-min corner found its way to Dier at the far post, but his header was cleared off the line by the alert Diogo Dalot. It was a match that lived up to its importance as a top-four clash.

Spurs controversially equalized in the 35th minute. After our own penalty appeal was denied after nine minutes, referee Jonathan Moss pointed to the spot for what appeared to be a very similar offence when Dejan Kulusevski’s cross smashed against Alex Telles’s arm, following United’s failure to properly clear a Dier free-kick that smashed against the wall.

Despite the protests, Kane stepped up to convert his penalty in front of the Stretford End to tie the game at one-all.

Three minutes later, Jadon Sancho crossed for Ronaldo to sidefoot home, igniting further debate about this value-for-money watch. Spurs were furious, claiming that Sancho was offside, but after a VAR review, Ronaldo’s second was confirmed, with Sergio Reguilon behind Sancho, and United led 2-1.

Sancho looked to extend our lead with a shot that was saved by Lloris just before half-time, but Old Trafford was bouncing after a fast and furious first half that saw United lead at the break.

Spurs came out for the second half with the intention of regaining control of the game and capitalizing on the Reds’ quiet start. The visitors, on the other hand, could only muster a right-footed shot from Son that zipped past De Gea’s post shortly after the hour mark, following an incisive move.

After 66 minutes, United finally found an answer when Ronaldo hit a stinger on the run that was saved by Lloris.

Anthony Elanga replaced Marcus Rashford two minutes later. As Spurs turned their pressure into an equalizer in the 72nd minute, Ralf Rangnick was ready to send on Victor Lindelof. The Londoners switched from right to left to set up Reguilon for a cross that Maguire turned into his own net as he attempted to block the dangerous cross into the six-yard box.

Ronaldo responded to the setback with another quick shot, but Lloris was equal to it in the 76th minute, turning it aside for a corner.

MUST READ:  Comedian Trevor Noah takes a bow as host of The Daily Show

More positive substitutions came from both dugouts as both teams went for the game-winning goal. Spurs manager Antonio Conte substituted Lucas Moura for Kulusevski, and Rangnick responded by substituting Edinson Cavani for Matic.

It promised to be a tense finale, and it delivered. Before Cavani could make an impact, it was Ronaldo who delivered once more.

Alex Telles’ 81st-minute corner was met with an aerial assault by Ronaldo, who rose to head home for his hat-trick. He was then escorted off the stage to be replaced by Lindelof, and the hitman hero received a loud standing ovation as he exited.

It was edgy as Spurs attempted a third comeback, but United held on for a crucial victory.

Ralf made five changes from the side that lost to Manchester City last Sunday in the derby with Bruno Fernandes ill and Cristiano Ronaldo returning to the starting line-up.

In defence, Diogo Dalot and Raphael Varane replaced Aaron Wan-Bissaka and Victor Lindelof. Nemanja Matic came in for the injured Scott McTominay in midfield, while Marcus Rashford was preferred to Anthony Elanga in the attack.

There was just the one change for Antonio Conte Spurs as Sergio Reguilon replaced the injured Ryan Sessegnon having done so particularly effectively in the 5-0 win over Everton on Monday.

“It was an amazing performance,” the Italian said. “Unfortunately, I know him very well. We are talking about a player who, along with [Lionel] Messi, is the best of this era. He is decisive and in the moments when the team needs him, he is always present.

“I remember also in the Champions League group for Manchester United, he was decisive. He is a player who feels this type of game. When he feels the blood, he becomes Cristiano Ronaldo. A fantastic player, I repeat.”

Rangnick, meantime, felt there was more to Ronaldo’s evening than just the goals. “He made the difference for sure with his three goals but not only with his three goals, I think that was his best performance since I arrived, on and off the ball,” he said.

Did that off-the-ball effort prove he was still capable of a pressing game? “Today, for sure. We have to be honest and say that he has not always done that in recent weeks and months. He showed that he is physically at that level and that is important.

“We were just joking, maybe it makes sense for him to go to Portugal for a few days and not train until Thursday. Maybe we need to do that until the end of the season.”

Ralf pleased with his team’s reaction

“I think the whole team showed the reaction expected after a poor second half at the Etihad,” said the Manchester United interim boss in his press conference. “I think coming back after two equalisers also showed the mentality of the team today.

“Before we left the locker room I said to the team, today is the best possible day, venue and opponent. It was the only answer we could give. The way we played in the second half there was not Manchester United like and that was exactly the reaction we needed to show.”

“We have to try to improve with experience, to manage the game,” said Conte afterwards. “And the game is not one game, there are many parts of the game. There are moments to push high, go strong, push to win duels, and moments to keep possession, be calm.

“We are drawing and after one minute we conceded a goal. We draw 2-2 and then we concede a goal on set pieces. But we are working on this. It is not that we are not working. They need time to improve. You can see that improvement on the pitch. But it is a process, you need time and patience.”

Manchester United will play Atletico Madrid in the second leg of their Uefa Champions League  last-16 tie on Tuesday, March 15 at 8 p.m. Their Premier League match against Liverpool on Sunday, March 20 has been postponed, which means Ralf Rangnick’s side will play Leicester on Saturday, April 2 at 5.30 pm.