Actress Onyii Alexx celebrates her 30th birthday with alluring photos and a video, the curvy actress danced in a sexy way to Phyno’s song “I belong to you” featuring Peruzzi. 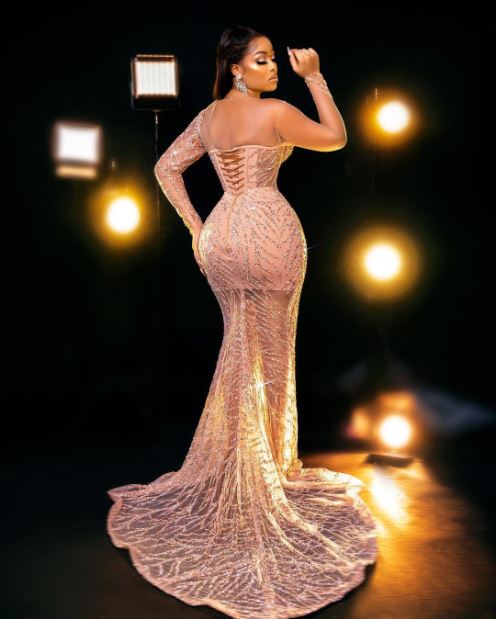 Onyii Alexx celebrates her 30th birthday by sharing cute, charming photos of her’s in a well-designed gown with lovely stones on it. She wrote this caption NWACHINEMERE  A new chapter  Authe Nwa on the photos that have set Instagram on fire.

MUST READ:  BBNaija Season 7:I Would Have Been Interested In Hermes If He Was In My Level-Beauty

It’s good to hear Onyii Alexx tells saying her age, most actress marks their birthday without disclosing the age they clocked but Onyii spills it out. Kudos and happy birthday to you(Onyii Alexx).

“I just want to thank you for being my reason to look forward to the next day!”-Nadia Buari gushes over her cute daughter(photos)

Onyii Alex is an actress and entrepreneur, she’s the CEO of bodyng a business venture that deals in clothing retail. The curvy actress dislikes associating with broke guys, this she disclosed in August 2021 in her Instagram account.

Her statement: “ I hustle because I don’t wanna be broke so I don’t think any broke man has the right to walk up to me and start declaring undying love for me.”

Onyii Alexx went on to say that it’s okay to trip from a distance but not okay if the person has the intention of getting into a relationship with her.

She pens this: “It’s a sin for a broke man to say he is in love with me. Like how?

“I hustle because I don’t wanna be broke. It’s okay to just trip from a distance!

“The goal is two hustles. Not a hustle and a leach biko.”

For the single men out there who want to date Onyii Alexx, knows what is required. Broke Guys stay away from her, that’s the message.

“I just want to thank you for being my reason to look forward to the next day!”-Nadia Buari gushes over her cute daughter(photos)