Hussein Ejibunu, Acting Comptroller, FoU, Zone A, stated that the rice was produced in India.

According to the Nigeria Customs Service, over 1,000 bags of harmful rice were intercepted in Ogun.

Customs revealed this in a press conference on Thursday, saying the parboiled rice was smuggled into the country via the Benin Republic.

MUST READ:  I Have Right To Marry 100 Wives In A Day And No One Has Right To Judge Me-Yul Edochie Bash Critics In A New Video 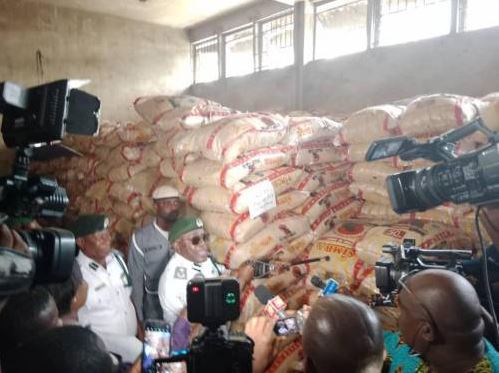 Nigeria Customs displayed the harmful bags of rice to the media

Hussein Ejibunu, Acting Comptroller, FoU, Zone A, stated that the rice was produced in India.

“After seizing the smuggled rice, we called NAFDAC (National Agency for Food and Drug Administration and Control) to conduct laboratory analysis and it was gathered that the rice named SIMBA which consists of Led substances that is poisonous to the body was produced in India,” Hussein Ejibunu said.

In a like manner, in December 2016, Nigerian customs confiscated 2.5 tonnes of “plastic rice” smuggled into the country by unscrupulous businessmen.

According to the agency, the fake rice, said to be sticky after being boiled, was intended to be sold during the festive season.

Incidentally, rice is the most popular staple food in Nigeria.

MUST READ:  Terrorist Threats Compelled Government Schools To give Students 13 Exams In One Day
Related Topics:featuredNaija News
Up Next