Singer David Adeleke, popularly known as Davido moved into his Mansion in Banana Island in January 2022. The singer just bought four televisions that cost him sixty-eight million naira (163,559.83 United States Dollar) to furnish the mansion to his taste. 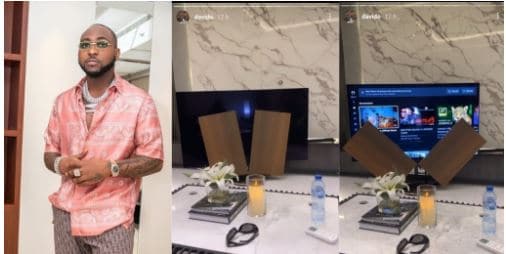 Davido has tastefully furnished his new mansion on Banana Island in Lagos.

The Singer spent N68 million on four designer television sets. His father just recently gifted him a piece of land in Banana Island.

Clips of Davido’s television were shared by his logistic manager, Israel, after he moved to his Banana Island mansion in January 2022.

“Woke up to another Land from Dad”-Davido elated as his father gifts him a land in Banana Island,Lagos

Each set costs N17 million, for a total of N68 million spent on four TV sets, according to Davido’s personal logistics manager.

He posted a video of the TV on his Instagram stories, with the caption “17 million per TV x 4 Oga.” You get the mind. “