Davido Respond To Artist That Displayed A Potrait Of Him,His Daughter and Late Mum On Twitter

Davido Respond To Artist That Displayed A Portrait Of Him, His Daughter and Late Mum On Twitter

David Adeleke famously known as Davido has reached out to an artist that shared his masterpiece artwork of him, his daughter and his late mother on Twitter.

Nigeria Afrobeat star Davido has responded to a tweet from an artist, who made a beautiful portrait of him, his daughter(Imade) and his late mother(Veronica Adeleke).

The artist with Twitter handle@dammycrisis_  wrote, I hope my artwork of @Davido will be in his new house in Banana Island and shared pictures of the artwork. He asked that his tweet to reshared so as to get noticed by many, specifically Davido. 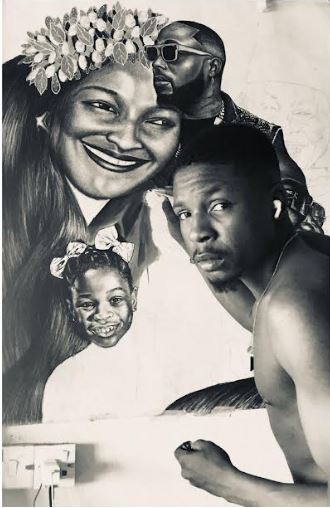 Dammy the artist, Davido, his Daughter and his late Mother

As hoped for the artist’s tweet reached Davido and the Afrobeat singer promised to purchase it when it is done. Dammy reading OBO’s response will definitely be somewhere in cloud nine.

MUST READ:  Breaking:Francis Arthur Nzeribe Is Dead
Related Topics:featured
Up Next

“Thank You For Caring For Our Son”-Ubi Franklin Appreciates 3rd BabyMama,Siyo On Her Birthday