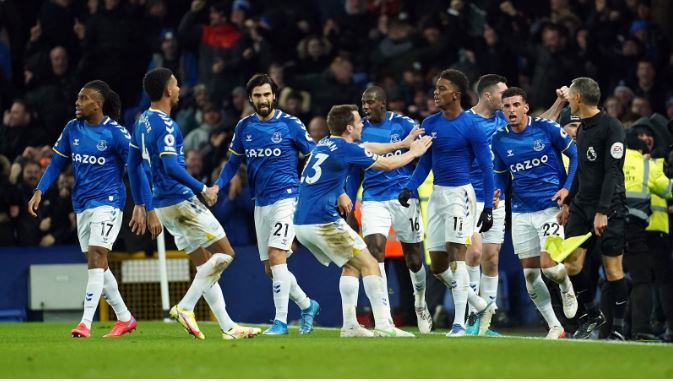 Demarai Gray stunner earn Toffees a deserved win over woeful Arsenal. The Gunners put on a shambolic performance at Goodison Park on Monday Night football, they have now lost back to back Premier League games.

Richarlison was twice denied goals by VAR after being judged offside, the first only moments before Martin Odegaard gave the visitors the lead in stoppage time at the end of the first half.

The Brazilian, on the other hand, was not to be denied a third time, as he headed home the rebound after Demarai Gray’s shot had hit the crossbar.

Arsenal had a glorious chance to retake the lead in the final 10 minutes when Eddie Nketiah headed against the post from inside the six-yard box, but Demarai Gray’s powerful effort hit the inside of the post and went in to start the home celebrations.

Everton, who saw a tiny number of their fans walkout in protest at the club’s management in the 27th minute, now sit in 12th place, alleviating the pressure on Benitez following an eight-game winless streak.

HOW EVERTON WON THE GAME…

Everton came into the game aiming to end a five-game losing streak and started brightly, but they did appear to be a team lacking in rhythm in the early stages.

In his programme notes, Benitez requested “great effort and dedication,” and an early crunching tackle from Godfrey energised the home crowd as they attempted to rally behind their team.

Some Everton fans left their seats in a planned protest during the 27th minute of the game, and a banner was unfurled in the Gwladys Street End that read ‘we demand nil satis nisi optimum, it’s about time our club did too,’ referring to the club’s motto, which translates as ‘nothing but the best is good enough.’

Back on the field, Godfrey avoided a VAR red card after standing in Tomiyasu’s face on his follow-through. VAR Stuart Attwell forced referee Mike Dean to take a timeout, but Godfrey, who Sky Sports’ Jamie Carragher referred to as a “fortunate child” during his half-time commentary, made it through.

Everton thought they had grabbed the lead in the 44th minute when Richarlison headed home from Andros Townsend’s free-kick, but a VAR assessment ruled the effort out for offside.

To compound Everton’s misery, Arsenal equalized moments later, with Odegaard volleying into the bottom corner after being set up by Kieran Tierney.

Richarlison had the ball in the net again after the break, but a VAR check deemed him offside once more.

Richarlison equalized in the 79th minute, heading in on the follow-up after Gray curled a shot against the crossbar.

Five minutes later, Arsenal’s substitute Nketiah headed against the post from four yards out, and it proved to be a costly error for Mikel Arteta’s team.

Demarai Gray’s ferocious long-range drive clattered a post on its way into the net in the second minute of added time, giving Aaron Ramsdale no chance.

The Gunners had one final chance, and it fell to Pierre-Emerick Aubameyang, who had been left out of the starting lineup. However, the Arsenal captain’s barren run in front of goal continued as he steered a shot wide, with Everton holding on to lift the gloom that had been settling over Goodison Park.

MUST READ:  Chelsea 2-2 Liverpool:stalemate at the Bridge

Everton manager Rafael Benitez made two changes to his starting lineup for the match against Arsenal at Goodison Park, including the return of Yerry Mina. The fit-again Mina replaced Lucas Digne, who was not in the matchday squad, while the injured Salomon Rondon was replaced by Anthony Gordon in the other personnel change from last week’s 4-1 loss to Liverpool.

Mikel Arteta made four changes from Arsenal’s 3-2 loss to Manchester United, bringing in Alexandre Lacazette, Bukayo Saka, Granit Xhaka, and Kieran Tierney in place of Pierre-Emerick Aubameyang, Emile Smith Rowe, Mohamed Elneny, and Nuno Tavares. Smith Rowe (knock) was the only member of the quartet who did not make the top twenty.

RAFAEL BENITEZ AND MIKEL ARTETA SPEAK AFTER THE GAME…

Rafael Benitez: “It is clear, when the fans, the players, everybody sticks together we are stronger. The reaction of the team to the goals that were disallowed and conceding a goal at the end of the first half, we still scored goals and reacted. Every player and fan is expecting that. Everybody is really pleased and hopefully, it is the right step forward.

“The VAR… I don’t know if the lines can be thicker or not? It was against us. I said a lot of times that we were close to winning a lot of times. Today was another example. Everything is against you but the character they showed today, with the fans behind, they can enjoy that. The fans were pleased because the players gave everything.

“The fans are expecting commitment. You can talk about mistakes and we conceded because we made mistakes against a good team. In terms of commitment, the players are there, and the fans appreciate that. They want to see a team that has spent a lot of money getting better and better. We will do it. It will take time, but we will do it. Everybody now has the hope.”

Mikel Arteta: “In the first half, we were very inconsistent with the ball. I didn’t like it. No penetration. One of the few times we did it we scored. Second half we tried to do more of those things, created four big chances but conceded a very sloppy goal when you need to manage the game.

“We couldn’t take the ball into the final third. They’re not going to give you time, at Goodison, you know what to expect. I think the team tried to go, we kept pressing high. We lost a few important duels that put us under some pressure.

“What I want is more from my team. Today you have the game under control even though you’re not playing your best and you have to find a way to win it. The way we conceded the goal and lost this match is not something good.

“It could have been very different but we haven’t managed to do it. When the opponent is there for the taking you have to do it and we haven’t. It wasn’t good enough.”

Everton travels to Crystal Palace on Sunday, December 12 (4.30 pm)   while Arsenal hosts Southampton on Saturday, December 11(3 pm) both games in the Premier League.