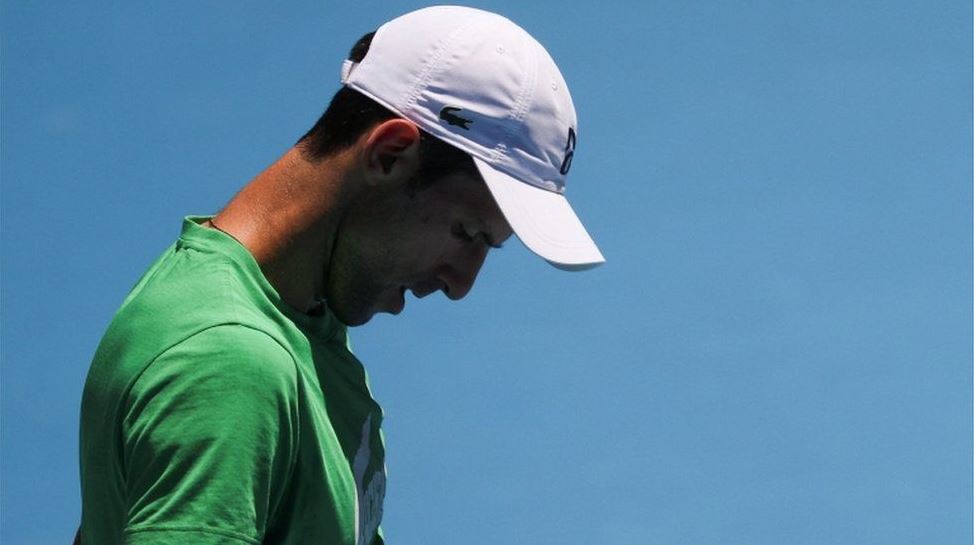 Novak Djokovic’s visa has been revoked for the second time by the Australian government, putting him at risk of deportation.

Djokovic visa revoked again and faces possible deportation from Australia with the Australia open set to kick off in the next three days.

Since a judge overturned the original ruling on Monday, world No. 1 Novak Djokovic has been waiting to see if Immigration Minister Alex Hawke will utilize his authority to reimpose the punishment. He might be deported and face a three-year immigration ban as a result of the judgment based on “health and good order” concerns.

The 34-year-old Serbian, on the other hand, intends to file a new court battle in order to remain in Australia.

The Australian Open, which begins on Monday, was supposed to feature the world number one in men’s tennis.

Immigration Minister Alex Hawke said in a statement “Today I exercised my power… to cancel the visa held by Mr Novak Djokovic on health and good order grounds, on the basis that it was in the public interest to do so”.

Djokovic, who has won the Melbourne Grand Slam three years in a row and nine times overall, has the option of appealing the decision to the Federal Circuit and Family Court.

The 34-year-old had been scheduled to begin his quest for a 21st Grand Slam championship against unseeded Serb Miomir Kecmanovic in Thursday’s first-round draw while awaiting a judgment on whether he could stay in the country.

Alluding to the heavy criticism his government has faced for allowing the unvaccinated player into Australia, Mr Morrison said: “Australians have made many sacrifices during this pandemic, and they rightly expect the result of those sacrifices to be protected.”

Djokovic will meet with immigration officials in Melbourne on Saturday morning and will be allowed to stay at his existing lodging on Friday night, contrary to reports in the Australian media that he would be transferred to an immigration detention hotel.

Djokovic is now in the Australian Open draw and will play fellow Serb Miomir Kecmanovic early next week. If he is deported, Russian player Andrey Rublev will most likely take his place.

Djokovic’s visa was first revoked on 6 January, shortly after he arrived in Melbourne after Australian border Force officers claimed he “failed to present acceptable evidence” for a vaccine exemption.

Because it was unknown if he could meet the country’s tight entry criteria, his first declaration that he was coming to play in the Open sparked criticism from those Australians who have lived under long and strict Covid lockdowns.

When Djokovic first arrived, he was delayed for hours at the airport’s immigration check and then spent days in an immigration hotel. His visa was reinstated by a judge a few days later, and he was released after a judge ruled that border authorities had broken protocol when he arrived.

The statute gives him the authority to deport anyone who he believes poses a threat to “the health, safety, or good order of the Australian community,” although Djokovic can still appeal.

MUST READ:  Rangers sign Aaron Ramsey on Loan from Juventus

It comes after Djokovic addressed claims that his agent had submitted a false declaration on his trip paperwork by accident. After testing positive for Covid-19, Djokovic acknowledged meeting a journalist and having a photoshoot.

Is it possible for Djokovic to file a new appeal?

Djokovic contested the decision to revoke his visa, and a judge ruled in his favour five days later, allowing him to play in the Australian Open.

The world No. 1 might still file a court appeal, but if he doesn’t, his chances of capturing a 10th title at Melbourne Park and a 21st Grand Slam trophy are over.

Djokovic’s legal team, according to Melbourne-based immigration lawyer Kian Bone, will face an uphill battle to overturn the ruling before Monday.

Bone said “For Djokovic to get the outcomes he needs to play would be extremely difficult to obtain over the weekend,”