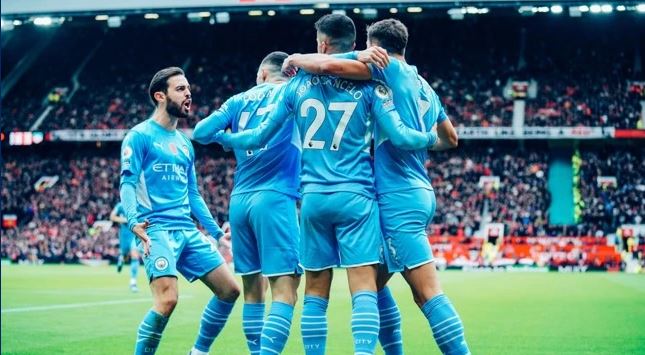 Dominant City outclassed hapless Man Utd 2-0 in Manchester Derby, United were awful all through the game.

The only shining light from United was Goalkeeper David De Gea who pulled some world-class saves, as he has done over the years. But he should share from the blame alongside the sleeping United defenders for the second goal scored by City Bernado Silva

The last thing Manchester United wanted after the heavy defeat suffered from Liverpool in one of football’s deadliest rivalries on home soil two weeks ago was to fall behind early, and they were architects of their own downfall in doing so.

At the back post, João Cancelo gathered the scraps and fizzed a teasing cross into the box, which Eric Bailly, unfortunately, converted into his own net.

United was starting to get into the game, and they can consider themselves unlucky not to be level at the half-hour mark. Luke Shaw’s rogue run finished with him picking out Cristiano Ronaldo in the area, but Ederson saved his exquisite left-footed shot.

United was all over the place, from being on the attack at one end to desperate defending at the other.

The United goalkeeper, on the other hand, was to have a forgettable moment just before the break. Cancelo’s cross drifted all the way through, and as the ball appeared to be heading towards goal, Bernardo Silva stretched out a leg and guided the ball goalwards, and de Gea bungled into the corner to double City’s lead.

United didn’t create many chances, with a Mason Greenwood 30-yard pop-shot coming the closest the hosts came to regaining control of the game. City was only toying with United as a 2-0 scoreline flattered them, with Phil Foden banging the woodwork.

City striker Gabriel Jesus was denied what looked like a clear penalty in the closing stages when he was clipped by Alex Telles, but the referee waved play on.

The full-time results do not truly reflect City’s dominant performance, but this was a vital three points and claimed supremacy in Manchester.

City was just good on the that they didn’t deploy a substitution, and each of their 10 outfield players had more touches than any Manchester United player.

Pep Guardiola’s side needed to win because they had cut the distance on Chelsea, albeit for a few hours, and the burden is now on the West Londoners to increase their lead.

United is more concerned about concerning a third goal rather than scoring themselves.

Ole Gunnar Solksjaer team lacks a playing identity, they need a structure to build consistency around and this should be done fast before the season gets out of their grip.

Victor Lindelof returned from injury to replace the injured Raphael Varane in Man United’s back three, with Fred replacing the suspended Paul Pogba and Mason Greenwood replacing Marcus Rashford. Edinson Cavani was out of the game due to an injury.

Man City named record signing Jack Grealish on the bench after Kyle Walker was certified fit. Kevin De Bruyne was named to the starting lineup after appearing in the midweek win over Club Brugge as a substitute. Gabriel Jesus started in place of the suspended Aymeric Laporte, who was replaced by Ruben Dias.

Man United will play Watford in the Premier League on Saturday, November 20 at 3 p.m., following the international break.

Man City, meantime, will return to action on Sunday, November 21 when they play Everton with kick-off set for 2 p.m.