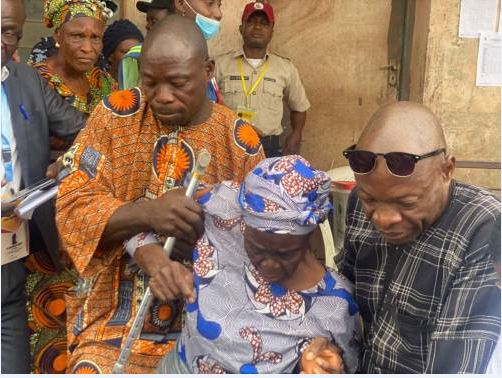 Mrs Felicia Fayomi is being assisted by two men

Mrs Felicia Fayomi, a 105-year-old voter in the ongoing Ekiti State governorship election, has charged the winner to represent the general interests of the people of the state by ensuring peace, economic prosperity, and fighting poverty.

Fayomi, one of the oldest voters in the ongoing election, made the charge after voting at Polling Unit 6 Ward 2 in Ifaki-Ekiti.

While expressing gratitude for having exercised her civic right as she had always desired, she also charged the potential poll winner to work on lowering the cost of living in the state.

According to PUNCH, the woman, who was escorted to the polling place by one of her granddaughters, danced after casting her vote.

She was glad to be alive to exercise her right in the ongoing election, she said.

“I am happy today. I wanted to vote and I have just done that,” Mrs Felicia Fayomi said.