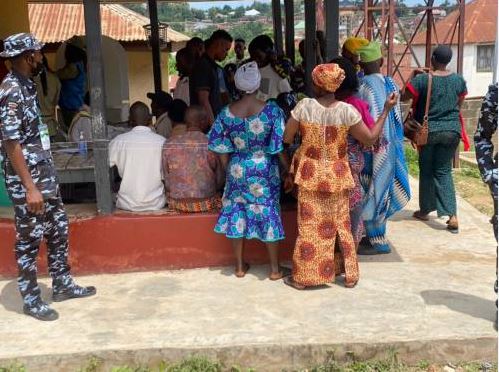 The ruling All Progressives Congress (APC) and the opposition Peoples Democratic Party (PDP) have both been accused of vote-buying in the ongoing governorship election in Ekiti State.

Men and women, including the elderly, were seen rushing in and out of Polling Unit 009, Oisa Alada Hall, Ward 02, Okeruku in the Ikere Local Government Area, inside a house located behind the Oisa Alada Hall, to receive payment for their votes.

MUST READ:  Fire razes shops under Apongbon bridge in Lagos

An election observer said that before allowing them to enter, a slender woman wearing a black round-neck t-shirt collected their PVCs and took them in.

Some of the beneficiaries who refused to reveal their identities confirmed the vote-buying to the observer, saying they were given N7,000 each by APC members inside the house.

Similarly, Prof. Kolapo Olusola-Eleka, the former Deputy Governor to former PDP Governor Ayodele Fayose, was caught on camera beside a house on the road leading to a polling unit near the palace of Ogoga Ikere Kingdom.

The former deputy governor was seen directing a man carrying a backpack full of money to hand over an unspecified amount of money to some security officials, including police officers who surrounded him in a circular formation.

According to an observer who provided the information to SaharaReporters, the security personnel who left their duty post at Oisa Alada Hall, Polling Unit 009, Ward 2 Okeruke, and ran after Olusola-Eleka when he passed by with some thugs, later got some money and divided it among themselves.