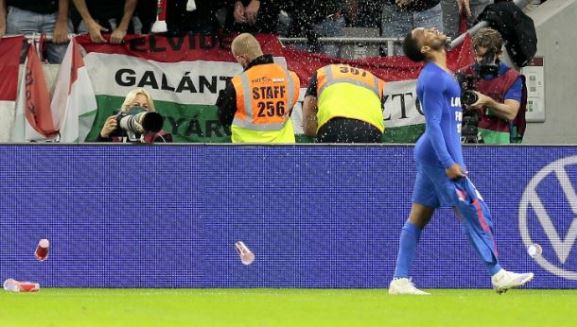 England players booed in Hungary when they took a knee ahead of their World Cup qualifier against Hungary in Budapest.

In June Republic of Ireland was booed for making the same gesture in Hungary. This is disgraceful and totally unacceptable in football and our society today.

After Raheem Sterling scored the first goal in Budapest, the England players were pummeled with cups thrown from the crowd.

Following Harry Maguire’s 3-0 lead for the Three Lions, a flare was fired onto the pitch.

Despite being ordered to play their next three UEFA competition matches behind closed doors – with one of those games suspended for two years – following racist abuse from supporters and homophobic banners in the stands during their Euro 2020 group stage matches in Budapest, a full-capacity crowd of 60,000 was present at the stadium.

During Hungary’s loss to Portugal in the tournament’s opening game, a homophobic banner was seen in the fans, while monkey chants were heard during their draw with France.

Marco Rossi, Hungary’s Italian coach, had declared ahead of the match that if England’s players were exposed to racial abuse, he would be “on their side.”

England manager Gareth Southgate refused to say whether his team would walk off the field if Hungary’s fans racially insulted England players during the game during his own pre-match press conference.

After Bulgarian fans racially attacked Southgate’s players in a Euro 2020 qualifier, England opted to play on in Sofia in October 2019.

When England’s players took a knee for their Euro 2020 warm-up games earlier this summer, some of their own fans booed them, and small portions of the audience booed them again in their Euro 2020 opener against Croatia.

Since the start of the domestic season, players who take a knee have been booed at various club matches.

WILL HUNGARY BE PUNISHED?

The world awaits findings from FIFA on racist behaviour from Hungarian fans during their team world cup qualifier match against England.

Furthermore if Hungary fans truly racially abuse England players, stiffer penalties should be given to the Hungarian National team.

Football is a beautiful sport enjoyed all over the world, a few miscreants should not be allowed to ruin our beautiful game.

EUROPEAN WORLD CUP QUALIFICATION ROUND UP