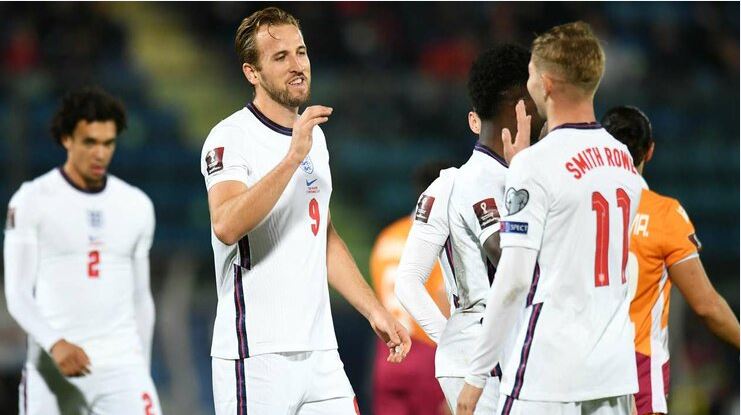 With a 10-0 crushing of sorry  San Marino, England booked their place in the 2022 World Cup. Harry Kane scored four goals and moved up to third in England’s all-time scoring charts.

In the final FIFA World Cup Group I qualifier, top-seeded England needed only a point to qualify for next year’s World Cup Finals in Qatar.

That was an inevitability against San Marino, England was professional and relentless as they mercilessly defeated FIFA’s 210th and lowest-ranked nation, shattering records in the microstate.

The ‘Three Lions’ seized the lead after only six minutes when Phil Foden’s corner was met by Harry Maguire, who now has two goals in his previous two England games.

After 10 minutes, Bukayo Saka’s deflected shot off Filippo Fabbri made it 2-0. After Dante Rossi was adjudged by VAR to have handled the ball in the penalty area following Foden’s magnificent overhead kick, Harry Kane made no mistake with the resulting spot-kick to set a new England record with his 13th international goal in 2021.

Kane soon found the back of the net again, this time heading in an Emile Smith Rowe cross into the far corner.

Kane’s third goal of the night came from a penalty, with the captain slamming into the top corner. After scoring a hat-trick in the first half against Albania, Kane repeated the feat inside 42 minutes at Olimpico di Serravalle, becoming the first England player to score four goals in a single game since Ian Wright in 1993, and bringing his international goals tally to 48, level with Gary Lineker in the all-time scoring charts.

MUST READ:  Liverpool to clash with Real Madrid in CL last 16 (full draw)

Hat-tricks for Harry Kane and he even managed to score his fourth before the halftime whistle.

After the break, Smith Rowe scored his first international goal, but the hosts were reduced to ten men when Rossi drew his second yellow card. Tyrone Mings headed in the subsequent free-kick with 20 minutes remaining.

With three points, England has clinched first place in the group and can now focus on the major tournament next winter. San Marino, on the other hand, did not earn a single point during the qualification process and, despite the fact that several teams still have one match to play, they have conceded at least six goals more than any other team.