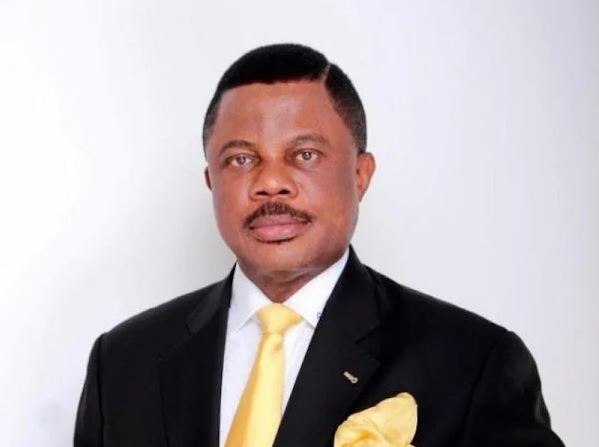 Immediate past Governor of Anambra state Willie Obiano has spent his first night in EFCC custody after being arrested on his way to Texas.

Willie Obiano spent his first night as the immediate past Governor of Anambra State in the custody of the Economic and Financial Crimes Commission, EFCC spokesman, Wilson Uwujaren, confirmed.

Wilson, however, did not state how long the anti-graft agency will keep the Ex-Governor of Anambra state.

The EFCC spokesman did not say whether the ex-governor was arrested with his wife, Ebelechukwu.

“Obiano was arrested and he is still in our custody,” the EFCC official disclosed, promising to provide the anti-graft agency’s next line of action in the coming days.

Enomaomoruyi reported that the Ex-Governor of Anambra state has been arrested at Lagos Airport en route Texas.

The former governor, who had been on the EFCC’s watch list since November 15, 2021, was apprehended while attempting to board a flight to the United States.

Obiano was apprehended just hours after handing over power to his successor, Charles Soludo, in Awka, the capital of Anambra State.

The arrest came just hours after his wife was allegedly slapped by the widow of the late Chukwuemeka Odumegwu-Ojukwu, Bianca, at Soludo’s inauguration as governor of the state.

Obiano was arrested, according to reports, for allegedly mismanaging the N17 billion Paris Club refund and security vote.

He is also being investigated for a number of suspicious projects, including the Umueri International Airport project, the cost of which was thought to be exaggerated.