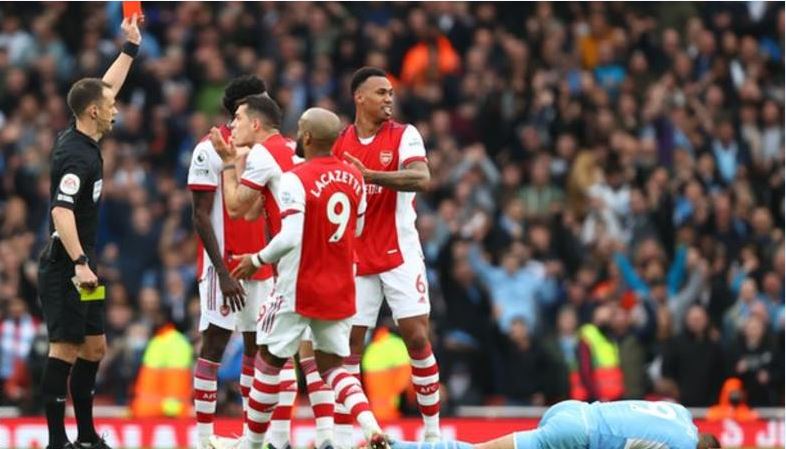 Arsenal has been fined £20,000 by the Football Association(FA) for failing to guarantee that their players behaved in an orderly manner during their match against Manchester City.

FA fined Arsenal over player misconduct in City 2-1 defeat, Gabriel, a Gunners defender, was sent off after earning a second yellow card in Saturday’s home defeat.

As City recovered from behind to win 2-1, the Brazilian was booked twice in the first two minutes.

City was awarded a penalty just before the second booking.

After consulting the pitchside monitor, referee Stuart Attwell changed his first judgement and awarded the spot-kick.

Gabriel was sent off just a minute after conceding from the spot. His first caution was for attempting to scuff up the penalty area, and his second was for a foul on Gabriel Jesus.

Arsenal had taken the lead via Bukayo Saka, but Riyad Mahrez equalized from the spot and Rodri completed the comeback triumph in stoppage time.

After the game, Arsenal assistant manager Albert Stuivenberg and goalkeeper Aaron Ramsdale demanded that officials use the pitchside monitor with more consistency.

The Gunners felt they were outdone by VAR and referee Stuart Attwell decisions, going by their reactions during those key moments and after the game.

Related Topics:Arsenal news
Up Next