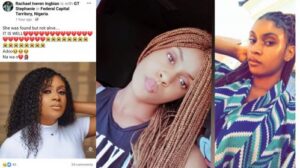 Stephanie is a graduate of Micro Biology from the Joseph Sarwuan Tarka University, Makurdi, Benue State.

Richard Lorliam, who claimed the missing corps member was his niece, made her disappearance public.

Terungwa was last seen on Thursday in the Lokogoma area of Abuja, according to a post on Lorliam’s Facebook page.

Lorliam claims she was kidnapped along with her one-year-old son while returning from a Community Development Service exercise.

He did, however, state that the baby was later discovered, but the mother was still missing.

“My niece is missing…anyone with information should come forward,” he wrote in several Facebook posts. Lokogoma, Abuja, was the last known location.”

In another post, he stated, “Abducted with her 1-year-old son after attending NYSC CDs.” The baby was later discovered, but she is still missing. Please share until she is located.”

Meanwhile, Rachael Iveren Ingbian, a friend of the young woman, has taken to Facebook to announce that Terungwa was found but was already dead.

“She was found but not alive…

As of when this report was written the spokesperson for the FCT Police Command Josephine Adeh , has not been reached as her phone lines were not connecting.