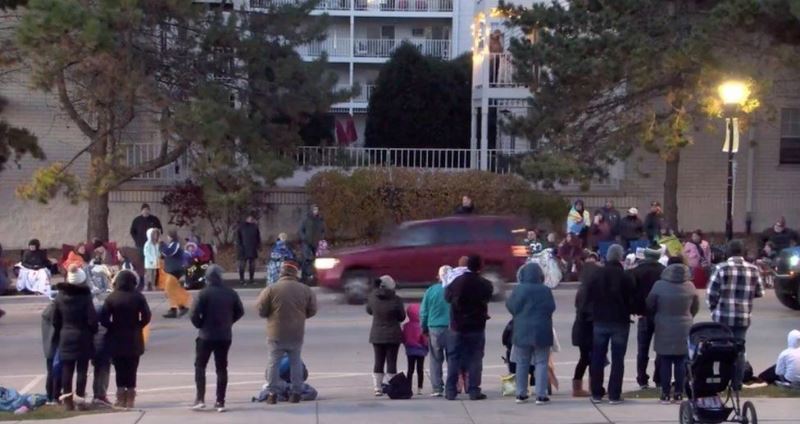 Police say a car rammed into a Christmas procession in Wisconsin, killing five people and injuring over forty more.

It injured dozens of people, including children, according to police chief Dan Thompson.

People had died, he added, but he wouldn’t say how many until family members had been informed.

A law enforcement person familiar with the early findings of the investigation told the BBC’s US partner CBS News that the suspect looked to be fleeing another scene when he ran into people at the parade.

They stated that the incident did not appear to be a terrorist act at this time.
According to local resident, Angelito Tenorio had just finished marching in the parade when the event occurred.

“We witnessed an SUV putting the pedal to the metal and speeding along the procession route. Then there was a massive crash, followed by deafening yells and screams from persons who had been hit by the vehicle “he stated

“Pom-poms, shoes, and spilt hot chocolate were all over the place. To find my daughter, I had to go from one crushed body to the next “‘I told the paper,’ he said.

Chief Thompson stated that authorities had found a suspicious car and that a person of interest had been apprehended, but he did not provide any other information. He went on to say that the investigation was “extremely fluid.”

According to him, police fired at the automobile in an attempt to halt it. The probe is being assisted by the FBI.

After the event, fire chief Steven Howard told reporters that his crew had sent 11 adults and 12 children to surrounding hospitals. Waukesha’s public schools will be closed on Monday, according to the city’s police department.

Meanwhile, Mayor Shawn Reilly described the situation as “traumatic” for the city. “My heart breaks for all those who have been affected by this heinous act,” he stated.

A video posted to social media shows the car crashing through street barricades at high speeds. Another image shows the truck crashing into a group of musicians.

During the incident, police officers sprinted along the street, ordering people to seek refuge in stores, according to local media.

According to one witness, the vehicle reportedly hit a gathering of “Dancing Grannies,” with at least one person flipping the car over.

“Some of our members were impacted,” the Milwaukee Dancing Grannies said, “and we are waiting for word on their situations.”

“Please keep the Grannies, all those who were hurt, and all those who witnessed this awful act in your thoughts and prayers,” the organization posted on Facebook.

TV station CBS 58 afterwards uploaded photos of a red SUV with a crumpled bonnet parked in a driveway on Twitter.

The White House is “closely monitoring” the situation in Waukesha, according to a White House spokesman, and is assisting state and local officials “as needed.” President Joe Biden has been briefed on the situation.