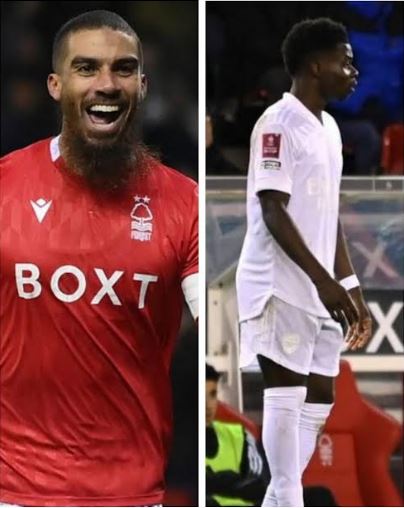 Arsenal were knocked out of the FA Cup by Nottingham Forest thanks to a late goal by Lewis Grabban. This is the second time in the past 26 years, that the Gunners have failed to make it past the third round of the FA Cup.

The Championship side won 1-0 thanks to the substitute, setting up an East Midlands clash with Leicester in the fourth round. Arsenal, 14-time champions, put in a disorganized effort that deserved to lose, with Forest more than matching Arsenal to continue their upward trajectory under Steve Cooper.

Four years ago, the Gunners were defeated 4-2 in the third round by a managerless Forest, as Arsene Wenger’s reign came to a dismal end.

Arsenal may be slowly waking up under Mikel Arteta, but they experienced the same fate at the City Ground, demonstrating that there is still much work to be done.

MUST READ:  Blues cruise to 3-0 victory over frustrated Foxes

Forest has outdone Arsenal again in the FA Cup 3rd round…

Throughout the game, they struggled to get past Forest’s well-organized defence, with Eddie Nketiah missing their best chance and Martin Odegaard and Bukayo Saka closing them down quickly. During a timid first half for the Gunners, who were wearing all white as part of an anti-knife crime effort, Nketiah and Ben White dragged off target and Albert Lokonga had a shot deflect wide.

Forest was more effective in attack, even if they didn’t put Bernd Leno to the test, and Arteta’s concern was obvious when he took Nuno Tavares off after only 34 minutes.

The defender, who was substituted by Kieran Tierney, had a poor first half in which a reckless back pass almost caught Leno off guard. His annoyance was evident as he threw his gloves to the ground without even looking at his boss.

It summed up the Gunners’ messy half – they were far from in command, and Forest had shown signs of causing them problems with their pace.

Arsenal had plenty of possession, but Forest was unconcerned in a forgettable first half – which would have suited the hosts, who resumed play swiftly after the break.

When Brennan Johnson left Cedric following on the right and crossed for Philip Zinckernagel to test Leno, they created the game’s first serious chance.

When Saka baited Jack Colback and crossed for Nketiah, it was Arsenal’s turn to miss a great chance.

The attacker had gained possession of Joe Worrall’s back and had a free header from six yards, but he badly miscued his shot, which rolled wide.

The game threatened to come to life, and Leno saved James Garner’s free-kick just after the hour as Forest surged, but it was all far too brief.

On his complete debut, Charlie Patino was replaced by Alexandre Lacazette after failing to make an impact, but the same can be said for his teammates, who lacked togetherness.

It was a drab performance that belied the Gunners’ recent form. The hosts sensed their chance, and it was Arsenal’s fault when they finally broke through with seven minutes remaining.

It was a drab performance that contradict the Gunners’ recent form. The hosts sensed their chance, and it was Arsenal’s fault when they finally broke through with seven minutes remaining.

Sambi Lokonga lost possession of the ball in midfield, and Yates was slipped in down the right flank to deliver the perfect cross for Grabban to slide in and win the ball from six yards. 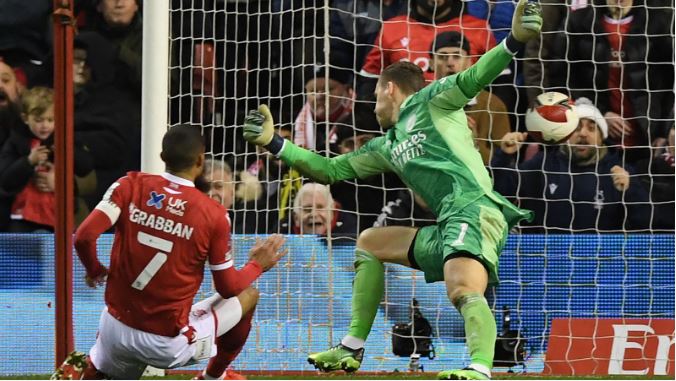 This leaves Arsenal with just two competitions to focus on for the rest of the season: the Premier League and the Carabao Cup – the latter resumes on Thursday.

Forest travel to Millwall on Saturday at 3 pm, while Arsenal faces Liverpool at Anfield in the first leg of their Carabao Cup semi-final at 7.45 pm.