The suspected killers of Deborah were earlier arrested and detained by the police.

Governor Aminu Tambuwal of Sokoto state has imposed a curfew in Sokoto State to prevent the spread of violence by Muslim protesters, primarily youths, demanding the release of two suspected killers of Deborah Samuel, a female student at the Shehu Shagari College of Education. 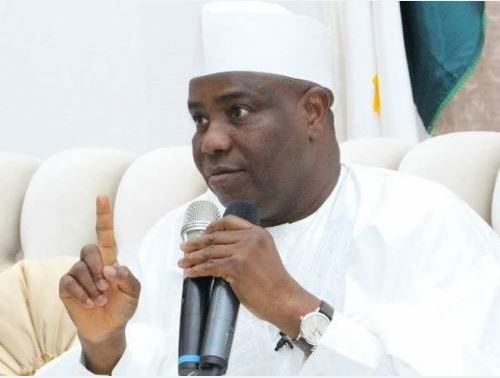 The suspected killers of Deborah were earlier arrested and detained by the police.

The governor said the directive was issued “in pursuance of peace and order in Sokoto metropolis and the entire state.”

On Saturday, violent outbreaks were reported across Sokoto amid protests calling for the release of those responsible for Deborah’s death on Thursday.
Deborah, a 200-level home economics student, was murdered around 9 a.m. for allegedly criticizing the Prophet Muhammad.

Her death has sparked widespread outrage, with political and religious leaders calling for the immediate arrest and prosecution of all suspects.

Enomaomoruyi reported earlier today that residents of Sokoto State, primarily youths, stormed the Sultan of Sokoto’s palace on Saturday, setting up a bonfire near the building and demanding the release of the two suspects.

Residents In Sokoto Plan To Protest Following Police Arrest Of Suspected Killers Of Female Student,Saying The Suspects Were ‘Fighting For Islam’,Prophet Muhammad’