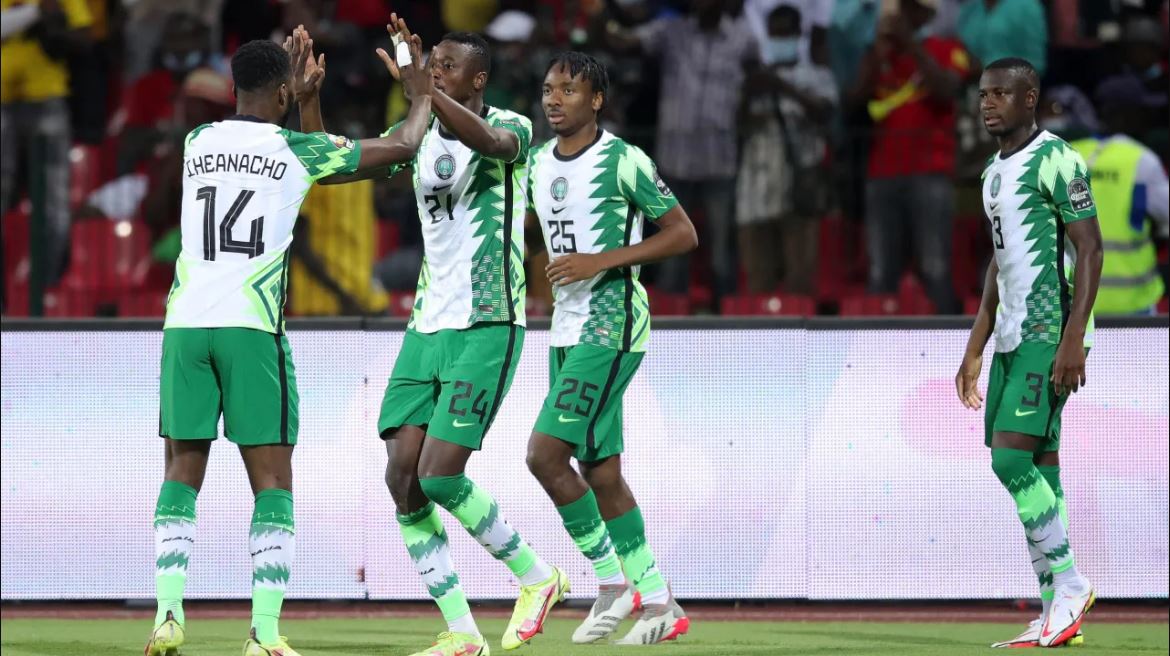 Super Eagles of Nigeria defeated Guinea Bissau 2-0 to become the only team at the Africa Cup of Nations to win all three group games.VAR was needed for both goals to be valid.

Nigeria had already qualified for the knockout stage coming into this game, it was no surprise that some key players were left out. The team put out on the pitch was still a formidable one that can match the Guinea Bissau side.

The Super Eagles of Nigeria made a title favourite statement after defeating Guinea-Bissau 2-0 in the third and final round of Group D of the 33rd  Africa Cup of Nations, Cameroon 2021, thus breaking the dream of the Djurtus moving forward in the competition.

Nigeria, who had already guaranteed their presence in the round of 16 in previous rounds, finish the group stage with 9 points and became the only side that has won all three group games in AFCON.

Guinea Bissau came into this game with one point, as a result of the zero scores against Sudan, in the first round, having lost the second match by a score of 1-0, to the Pharaohs of Egypt, who had come from a defeat by the same score against Nigeria, the only team in the group already qualified, with six points (another victory was 3-1 against Sudan).

With this point, Guinea-Bissau was obliged to beat a strong Nigeria, with four goals and only one conceded. A draw in this match would mean goodbye for the Lusophones.

Nigeria is AFCON Champions on three occasions (1980, 1994 and 2013), the Super Eagles, in terms of individual quality, is one of the most talented teams in African and world football.

After the era of Okocha, Oliseh and Amunike (the 1990s and early 2000s), the last great generation was in the early 2010s, in a team with Enyeama, Obi Mikel or Victor Moses.

MUST READ:  Liverpool held Man City to a 2-2 draw to keep title race chase on

Without goals and with a game without much intensity, the Super Eagles from Nigeria and the Djurtus from Guinea-Bissau played a first half characterized by a lot of physical contact and some stoppages, which made the game not a sight to behold.

Guinea Bissau needed so much from this game owing to the fact that they had just one point since only victory was important to guarantee them participating further in the competition, which didn’t apply to Nigeria, who entered this duel with their passage to the next phase already guaranteed.

Both teams were stuck to their tactical systems and only created sporadic goalscoring situations. Nigeria had three chances (22′, 23′ and 30′) to open the scoring, but they lacked objectivity in their attempts at goal.

The most noteworthy chance registered by the representatives of the Lusophone countries, along with Cape Verde, came with a minute to go in the first half when the striker fired a shot from the edge of the penalty area, but the ball flew over the goal.

Nigeria had to be patient with their play and that paid off in the  56 minutes to get a goal. A combined counter-attacking move led to a goal from striker Sadiq Umar, who successfully finished off an exquisite pass from Leicester City forward Kelechi Iheanacho Promise.

Of course, the goal brought so much life to the game and the 3-time AFCONchampions were in control of the game. In the 74th minute Nigeria captain, William Ekong scored the second goal but had to wait until a VARcheck for offside was completed and then the team celebrated.

In the other group game that was played simultaneously, Egypt defeated Sudan 1-0 to seal the second spot and also qualify for the knockout stage.