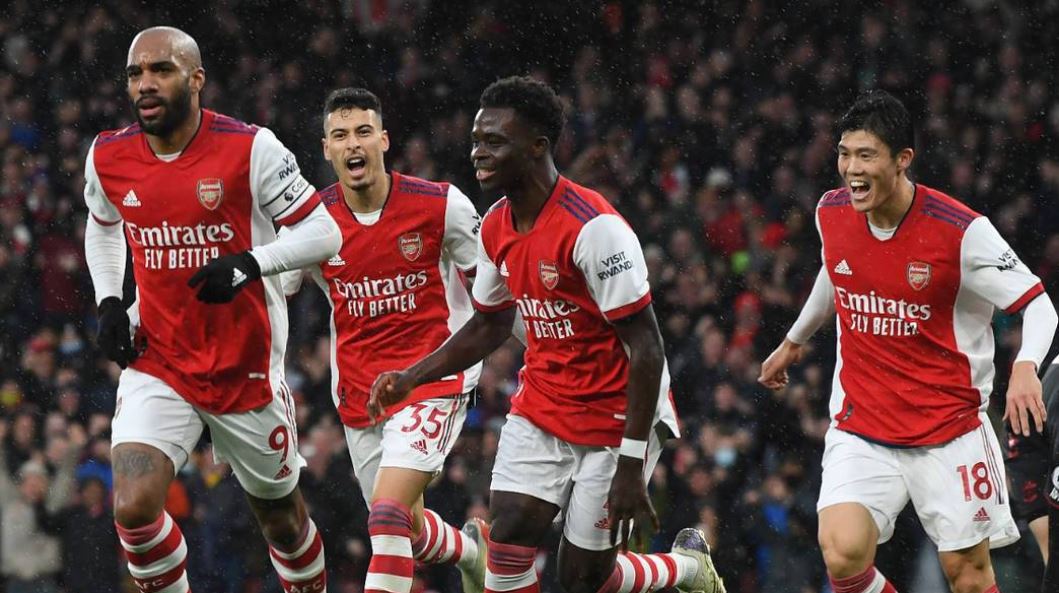 Arsenal 3-0 Southampton: Arsenal cut the gap on fourth place to a single point with a 3-0 win over Southampton in the absence of Captain Pierre Emerick Aubameyang who was dropped out of the matchday squad for disciplinary reason.

Arsenal was understandably jittery in the opening stages, having suffered three defeats in Premier four league matches, and was grateful for Aaron Ramsdale’s quick reactions, who sprang to his right to deny Adam Armstrong. Ramsdale was called into action once more, palming away a James Ward-Prowse free-kick before the set-piece specialist blasted another dangerous effort narrowly over the crossbar.

Despite their poor start, it was the hosts who broke the deadlock in the 21st minute, when Bukayo Saka teed up Alexandre Lacazette, who clinically sent a shot beyond  Willy Caballero a former City goalkeeper. The ‘Gunners’ looked unfazed by the early goal and doubled their lead five minutes later when Martin Odegaard rose unmarked in the box to comfortably head home his third goal in as many games.

Southampton attempted to start the second half on the front foot in search of a way back into the game but was met with a setback, shortly after the hour mark when Arsenal stretched their lead even further. Gabriel Martinelli’s whipping delivery reached Gabriel’s head, and the Brazilian centre-back redirected the ball past a flailing Caballero.

With a three-goal lead, Arsenal let off the throttle, allowing Southampton to produce a number of late consolation chances, the greatest of which fell to Nathan Redmond, who was well denied by Ramsdale.

With only one win in their previous 13 Premier League away games, Arsenal climbs to the fifth position, ahead of rivals Tottenham Hotspur and Manchester United. Southampton, on the other hand, continues to stare warily over their shoulder.

Mikel Arteta kept the starting eleven unchanged from the side that lost 2-1 at Goodison Park on Monday night, with Pierre-Emerick Aubameyang dropping out of the squad entirely, to be replaced by the returning Emile Smith Rowe on the bench.

It meant Alexandre Lacazette continued as captain, leading the line with Gabriel Martinelli and Bukayo Saka on the wings supporting him.

Southampton manager Ralph Hasenhuttl made five changes to the team that started in last weekend’s draw with Brighton including a debut for goalkeeper Willy Caballero, 40, who joined Saints last week after Alex McCarthy and Fraser Forster were ruled out.

Caballero, who was on the bench when Chelsea won the Champions League in May, was making his first Premier League appearance in 15 months.

Mikel Arteta and Ralph Hasenhuttl speak after the game…

Gunners boss Mikel Arteta “I’m very pleased. After a difficult period, we had two defeats where I don’t think we deserved to lose the games, but we did.

“We started the game a little bit nervy, you could tell that we were carrying that feeling still, but we finished strong.”

On the first goal: “It was [a ‘piece of art’] – that’s our identity, the way we want to play, it’s not possible to score all the goals like that. But that’s the direction we want to take.

“I am very happy. It’s a contribution from the whole game, what is required in every moment and then the execution and that’s what we’ve been lacking a little bit because the intention is there, it’s just doing it more consistently.

“You could see that the team wanted to keep attacking, hit the post twice, a goal disallowed.”

Saints boss Ralph Hasenhuttl “I think the signs before the game weren’t the best with players out with injuries. We tried, in the beginning, to be brave and play well. We concede in the first 15 minutes with their first chance. You could see the quality they had.

“We tried to score in the second half. But you can see the confidence they had after a second goal and a third goal. Overall, there was nothing to get for us today.

“I think the first goal was an easy goal how we conceded it. The other two were from headers. In the end, it was absolutely a deserved win for Arsenal. We have to pick up the points somewhere else.”

On Wednesday, Gunners will face Hammers at 8 p.m., while Southampton will face Crystal Palace at 7.30 p.m.